The once abandoned tunnels was buzzing with activity people, vehicles, horses and different equipment was everywhere and all was monitored by a figure in dark robes holding a long staff. No one said anything all knew what to do, the location of the object had been the easy part, removing it intact was the hard part.
Wizards and engineers alike worked side by side combining both magic and science it was the best of Damasa at once, to bad the mission was top secret so no one outside would ever know. Vespian watched in silence as the object slowly was moved up towards the exit of the catacombs, he didn’t really like dressing up like this but he needed to keep as low profile as possible. Not that anyone would dare question him, he was a member of the war cabinet after all, but still he was using national resources for his own gain.
Then it did not matter how much he tried to convince himself otherwise. It had just been a to good opportunity to miss and you did not really say no to her, just the thought of her sent chills down his spine.
Some time later the object had been safely moved outside and carefully loaded on a waiting transport, as on a given signal a small group appeared as out of nowhere. Alarmed some of Vespian soldiers draw their guns but he quickly shouted orders to stand down, the last he needed was a provocation. One on the figures approached him with a confident poise, despite being heavily outnumbered. Vespian however knew better. “Well, well, well, the little magos hold his promise, who would have guessed? I must say you do find new ways to surprise me”, the voice could turn the blood to ice in even the bravest of men. But Vespian controlled his feelings, he had always been good at that when needed, despite others opinion on the matter. “ Glad that I still can do that, I take that as a compliment...”.
Carahil just gave him one of those smiles a hungry wolf would give to a corned prey. She then gave some orders and her men took over the transport that slowly started to move.
“Your colleges won’t mind that you’re assisting me?” Her voice was just a little teasing. “They’re not here are they? He tried keeping the bitterness out of his voice. He did not really blame them. They were no fighters, still during the revolution it had been all for Damasa and now when their country needed them the most they weren’t here.
“No, they are not, which simplified things for me”.
She was quiet for a while before speaking again.
“I must say I was a little surprised you didn’t tried to claim it for yourselves back then or at least tried to negotiate a deal with me.”
Vespian took his time before answering.
“It doesn’t interest me enough to make it worth the effort”.
“Pity, I would have enjoyed it.”
Vespian choose not to comment on that.
Then without saying anything Carahil started to move, but stopped for a second, and turned her head slightly.
“Better get moving. I owe you a favor, use it wisely... little magos.”
And then she was gone. 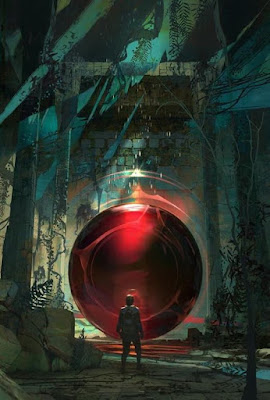 Posted by Niclas Ohlsson at 6:11 PM