A single-meeting adventure by the title of "An Unexpected Journey" was played out yesterday as the first test run of Centuria's Age of Knowledge rules and setting.

Four adventurers, for this occasion all males, set out on a journey to the colonies with a ticket to the World's Largest Steamer, the fabulous Gerard's Pride. 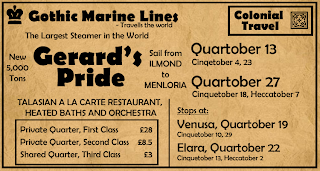 The journey did not however, go as planned.

Big thanks to all you adventurers who joined me to create this entertaining story. The script for the adventure can be found on the Downloads page.
Posted by Niclas Ohlsson at 3:25 PM No comments:

The World of Centuria - Age of Knowledge

“ ’There he is! Don’t let him get away!” the voice echoed in the dark narrow street.
A dark figure ran around a corner, cape fluttering in the light evening breeze. Four guardsmen where in pursuit, their dark blue uniforms with golden buttons glistering in the occasional light from an electric lantern. Their sergeant had one hand on his sword while the others had muskets at the ready.
‘Fire’ shouted the sergeant, but the hunted character threw itself around the corner just as a salve of musket bullets smacked into the facing brick wall, leaving the dust hanging in the gloom from a distant light.
‘Fix bayonets! That mage killed a Lord of the Assembly! I will not have him get away!’ the officer shouted at his men and then led them in pursuit around the corner.
The dark pathway soon twisted again and they continued, not taking any notice of the shadow as it moved behind them. With calm steps the figure left the alleys and walked out onto the main street. It lowered its mantle hood before stepping into the light of the lanterns and produced a fine cane from the darkness of the cloak.

The sergeant realized it was hopeless as they turned around a third corner. The culprit had eluded them. Sternly, to hide his disappointment, he led his men back out to the main street. At this time of night it was all but empty, the only noise being the light fizzing from the lights and the rhythmic sound of a walking stick hitting the pavement. A lone gentleman was walking the street, some thirty meters away. His eyes narrowed. The murderer must have looked like a gentleman to gain entry into the Assembly’s halls.
He led his men in a quick jog until they caught up with the man, who paid them no attention. As they closed he felt doubt – disturbing the wrong man, especially at this time, could have serious repercussions. But there had been something…
‘Excuse me, sir,” he said to the figure as he and his men slowed down.
The man turned around, but instead of a face the sergeant found himself looking at a black leather mask, covering most of the face but the mouth. And the mouth was smiling.
The guardsmen didn’t even react – there was no time. With lightning speed the cane hit the sergeant on his knee, causing him to fall down in agony. He heard a few quick blows before the street turned silent. As he struggled to get up he saw the mystic man run away along the street. He turned and the sergeant swore he could see him wink before he disappeared into the night.”
The world has moved on. Gunpowder, invented in the Age of Steel by the gnomes has figuratively exploded in the hands of men. Firearms have replaced swords in most countries and with the advance of science, magic finds itself on the retreat.
Harnessing the power of nature in a physical sense has become the quest of the age, giving birth to many more inventions such as the steam engine and the electric light. Medicine is also a progressing field, although with the populations flocking to the cities disease run rampant – at least among the poor. While many speak of the new age as a time of wonders and advancement for the vast majority it has in fact brought on harsher times. This is especially true for the orcs as the deployment of musket-armed forces has all but wiped out the last remnants of their ancient empire. Instead they find themselves as slaves, serving in the factories of men.
Not all embrace the new technologies however. The Empire, torn apart into rebellious provinces, is still staunchly traditional, refusing to abandon its ancient ways. Similar sentiment can be found among the ancient elves who watch in horror as forests are cleared to fuel the machine cities of men and dwarves. But there is conflict among the elves as well, as the young leave their homelands to seek out adventures in the human cities.
In a way the world has become smaller when people from all nations and races can be found living together and with inventions such as the railroad carrying passengers to distant destinations in a fraction of the time it used to take. But the world has also gotten larger, as explorers are beginning to find unchartered lands at the edges of the maps. The cannon-armed ships of the northern powers have even managed to cross the Sea of Dragons, reestablishing contact with the southern continent. It was not the happy reunion intended, however, as politics soon turned the situation into a war – turning the former province of Khamlira into a Gothic colony. Indeed, colonization seems to be the second trend of the age, as the northern kingdoms expand west, east and south. But the wealth brought from the colonies have also sparkled conflicts, forming new nations in their wake.
Thus the world continues to move, but perhaps at a faster and more frightening rate.
Posted by Niclas Ohlsson at 11:05 AM No comments:

The Centuria Core Rule Book is now available for download.

You'll find the rules as a PDF file on the Downloads page.
Posted by Niclas Ohlsson at 6:18 PM No comments: