Mekken forest. Not many people went there, mostly on account of the goblins but also - as all goths knew - the forest was always dangerous. It was not without reason that the goths of the north stayed in their villages and hamlets, cultivating borders against the wildlands beyond. No one knew what lurked among the moss-covered rocks and trees at night. Orcs and trolls? And perhaps worse yet?

As far as wildlands went though, Mekken didn't have a very bad reputation. The really old forests had scores of legends and spooky tales, but because it was so close - you could go there from Ardborg and back in a day - it didn't feel so threatening. Sure, there were murderers hiding there (provided they hadn't gotten eaten by trolls?), trying to stay away from the noose. Now and then some fool would go missing, but it was not like nobody ever came back. There were some stories; talking animals, flying goblins(!), giant bears and a coven of elven wizards - but of course there were! You could find a man in the Ardborg docks who swore he saw a prostitute jump from street to rooftop (some men just haven't got *it*, you know...) was just chased by a throng of chickens or encountered a stray dog with demon eyes. Why would the forest be any different? 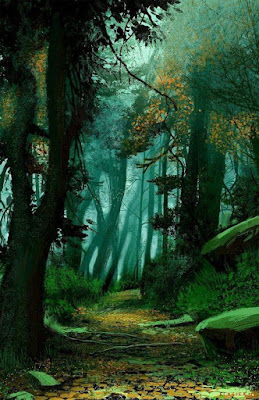 Posted by Niclas Ohlsson at 7:41 AM