The members of the Council of Mages, leaders of the Empire's mages, are known as consuls. The position requires political savy as well as magical skill but the power and prestige granted is a lure for many. There are nine consuls in total, with a tenth chair reserved in the Council's circle for the Emperor himself.


Quadrata has had a hard struggle to reach her post within the Mage council. Firstly she is a rather unconventional magician who rely more on strength and physique than knowledge and prowess. Secondly, her looks has always worked against her, being far from anything that could be described as beautiful. All this has turned her rather bitter and she is now struggling to maintain the power she has achieved. She often finds it difficult to pick sides in the internal power struggle of the council and her attempts to always be on the winning side has not made many friends among the other councilors.


Quadrata is highly suspicious towards human servants. She has a lifeguard consisting of four earth elementals of the third rank. Her servants are animated skeletons and she is said to consort with a number of demons of low and middle rank. 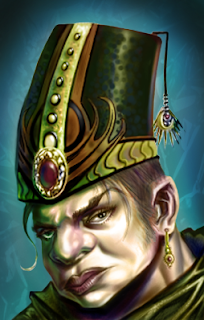 Part of Age of Steel: Characters.﻿
Posted by Niclas Ohlsson at 9:23 AM