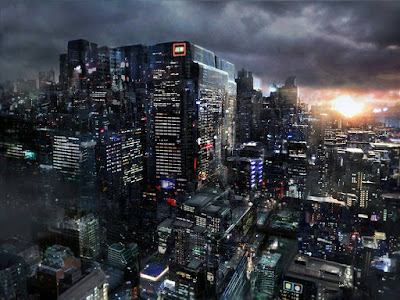 Nothing like coming home from a long run to find 1) lending sharks from the Clans giving you a ride and 2) arbitrators all over the place. In both cases they seemed most interested in Juron (guess we know where he got that fiberplate after all...) who seemed to have left one of his fish hooks in an inappropriate place (the mouth of a dead guy). So much for having a day off...

While Juron was dragged off to be interrogated by the city's finest we where left to try and save his ass. After all, if he got locked up he could pay no debts and then the sharks would come for us. Bye-bye pension savings account. But where to start? The little we knew was that it was being painted as a racial homicide of two nokhs by the media. It had happened on a day when Juron was out having fun with Sandrah, which included a visit to Babétte and a lot of memory lapses. Erza immediately jumped to the conclusion that Sandrah was behind it all. It caused quite a lot of tension back at base but didn't really lead to anything.

Well, to be frank its not something I want to talk about. We followed a few leads but got stuck in the end - however it seemed as Juron found his own ways out. It cost him another 10k but it worked. On a more positive side note I managed to drive home an important lesson on Fringe ethics. From what I surmised Erza had found a possible solution to get Juron out but choose not to when she learned the Clans had already offered to help (for the stated sum of 10k) as the solution was a bit shady. Well, it turned out the Clans solution was to make it look like a serial killing by murdering some more people (while Juron was still locked up at the station) and paying someone to take the blame. So, your ethics got people killed and still cost the fair sum of 10k just because you didn't want to break the law? I hope we can all act as grown-ups after this.

Thankfully Elizah had awarded us with an extra day off as a result of our good performance on Dukkha which gave us a chance to get some sleep and exercise and just hang out. Of course, the best way to "hang out" was generally agreed to be doing more work. A little corp-work gained us a few extra credits and we had all but forgotten about the bit where someone tried to frame Juron for murder.

Real work was coming up and while Lucas was hired for a job requiring his special skills our eyes where quickly set on a new piece of mission posted by GERO. "Scouting/Hunting" sounded intriguing and it did deliver on that point as it turned out another GERO scouting patrol had run into a pack of werewolves out in the forest. We were the cleanup squad. Apparently Ed had some previous history involving werewolves but he couldn't tell us much about them beside "they can rip off the arms of a man". Well, mr Butcher, so could my mother.

We set out a few hours later in a single jeep. Winter was coming, which could be felt in the air and seen on the presence of the snow tires. For my part it was again that feeling of simplicity: we had an enemy to fight and we would win or die. My orc blood loved it. My human blood... well it did make existential thoughts seem a bit redundant. And it involved good money (despite whatever Ed thought of it).

It was getting dark and I was driving when we reached the quadrant in which the werewolves had been encountered. It was at this point I had to revise my take on the GERO job description. It hadn't stated who would be hunting whom. Suddenly the pack was upon us... I could here Juron and Erza fire away from the back of the jeep, the heavy thud from Juron's assault gun disrupted only by howling. Ed, who was seated between me and Angeline in the front seat fired away out of my window. Don't know if we hit a rock or what next, but at one point I was driving on two wheels only... and then a werewolf crashed in through the windscreen. Ed and Angeline fired away like mad and I got the jeep to a halt and grabbed my shotgun just in time for a big ugly beast to rip open the door and try to take a bite out of me - he got fed his furry friend instead and then my flesh-tearing explosive rounds to the face. I got out to take care of any pursuers only to find there was only one left. Juron and Erza had left a clean house with a scarred hand and a few cuts from the broken front window as our only injuries. We loaded a few of the bodies to bring back as proof (Erza's orders) and then set out tracking them back to their camp. The jeep was in a bad shape but Angeline and Juron did the best they could to keep it together. Eventually we found another pair of werewolves out hunting: one was killed while the other fled into the forest, wounded. With winter coming... and the rest of the pack dead it probably wouldn't make it. Mission accomplished. We headed back home.

The contract had stated "minimum collateral damage" to the area itself but thankfully the jeep wasn't included... we got full our full payment and headed back for base - minds set for our next challenge.
Posted by Niclas Ohlsson at 8:54 AM