Kragor the Merc: A Favor for a Favor 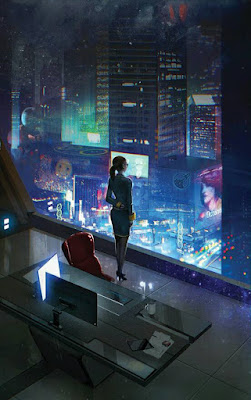 With money in hand we arrived back at HQ. Lucas was already back but from the look of him everything was not entierly to his satisfaction. I headed for the showers with a need to get rid of the mud and the small particles of broken windscreen.
Erza caught me a while later and told she'd got what seemed as a job offer from the Clans and wanted my opinion. For my part I already had enough of dealing with them and told her so. Yes, there was the matter of Juron's debt... but in my experience you never pay them off by working for the bank. That will just get you in deeper shit. And if there ever was a reason for me working for low grade pay at Freelance it was to have a choice. Otherwise you could just as well go corp. But to be a merc in the hands of the Clans? It'd be the worst of two worlds.

But we needed work, that was for sure, so I suggested we spend our day off investigating the rumors of escaped criminals' hiding out in the wilderness. It smelled corp to me and corp meant money. Erza was willing to give it a go and had a suggestion for where to start: a contact of hers in the Blocks. So we decided.

The next day we were off, but not before I did a little errand. As it seemed we were heading into deep shit I thought a little extra precaution would be wise so went to see Keria to get some tracker markers. Not that they would save my life but at least I could give Elizah a means to locate my body and perhaps extract some revenge should the shit hit the fan. I figured everyone of us could use one just in case the others needed to find that person. Juron was first on my list of people who should have one. As we were preparing to get started he had rushed off to the gym but given his investment with Clan money it seemed a good idea to bring him with us as all we knew was that people following these rumors had gone missing or ended up dead.
The meeting with Erza's contact, a rough-looking man named Ruben, proved fruitful. Apparently he had funding and influence in the Blocks and he showed us a security camera recording where one of his associated, who was asking questions, got her throat slit by a mysterious figure. The assassin's face was only visible for a few frames but it felt familiar... like I'd seen it before. There had been a body guard to Abriel - our contact at GERO. Could it have been her? It was as solid a lead as we could expect.

I had hoped for a straight line from this point, but we had barely left the building when things started to get complicated. Juron showed us a message he'd just received from Joline asking us to come right away. We decided to comply and raise any issues face to face. As expected it turned out to be a job offer. It was good money - 75k - which would place it in the category of "very appealing" without reaching "Juron could clear his debt with this". It wasn't a game I was willing to play so I decided to raise the stakes and told Joline that we'd already been booked at a job, just to see her reaction. It wasn't a team-sanctioned thing to do, but I felt I needed to know. It was clear she wouldn't let Juron get away from this one and it was equally clear Juron didn't want to get away from it. In fact it struck me the guy had an apparent habit of getting utterly dependent on any person who provided him with something he wanted. Babette would take his money for drugs. I could live with that. But what Joline would take... no, that couldn't end well. But this time we would have to do the job. For the sake of appearance I required that Joline provided us with any intel she had to help us with our other job as a part of the deal. This seemed to be just what she wanted - a favor for a favor - but it also cleared one thing for me: the Clans wasn't involved in that business. Which was good.
But before we left there was just one thing I had to do. The tracker markers where in my pockets and if this bitch wanted things to be personal she'd better be prepared to play that game... so I gave a stunning performance getting angry at Juron, who pushed me to the floor. In the fall I managed to tag a tracker to Joline's robe. We were rushed out of the room after that but it was well worth it.
Of course, neither Juron nor Erza took my behavior very well. Explaining it didn't quite help: Erza still thought it was a very dangerous and risky move but hey, fuck that. I still remember her version of playing it safe from Dukkha. Juron seemed hell-bent on being pissed out over the whole thing despite my best attempts at reconciliation. Apparently he had never been shot in the back by someone he'd trusted or he'd known the difference between a betrayal and an act for the greater good of the team. But since there wasn't much else I could do I had to leave him to wisen up on his own.

With all the tension slowly going away we were left with planning the job for tomorrow. What Joline wanted us to do was to high-jack a Ultra Weapon Systems armed transport by blowing up a slip road and forcing it to take a detour into the Blocks (where we would be waiting). According to the intel - which for a change was very good - we'd face some serious security. It would be a difficult task even with the demolition stuff going as clockwork. But we planned it to the best of our ability.

We left HQ very early the following morning to stake out the site and place some explosives. Our preparations hadn't gone entierly unnoticed but I had hopes we could claim doing the escape criminals gig when reporting back.

We managed to place the explosives without any trouble and then it was just a waiting game. Sitting in our get-away vehicle waiting on a side road to the expected route we had a walkway bridge rigged to explode as the convoy passed. It would be three vehicles with armor and a six man escort unit. The front vehicle would carry some mounted heavy weaponry. We blew up the slip road on time and then just waited for the action to start. After a while Juron reported the column had just passed by and Erza timed the demolition of the walkway. With the explosion and sound of rubble hitting metal I threw myself out and lobbed a fire grenade towards the last of the three vehicles, mostly to get a response. One came in the form of shotgun fire and I felt a sharp sting in my ass as I threw myself out of the line of fire...
Posted by Niclas Ohlsson at 9:52 AM