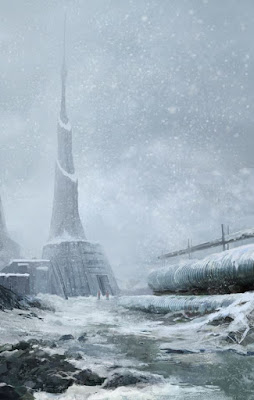 I keep saying this but its been an interesting week. Coming back fairly early from the Lightbringer job left us with a day and a half to do as we pleased. Erza suggested we'd head for the training dojo the same evening - leaving the next day free. Suited me just fine. We did a quick stop at the base where two interesting things happened. The first was that we noticed we already had a meeting booked for the day after with Union Arms. Sounded promising. The second was that Juron decided to pop a pill half an hour before our training regime. Might not have been the smartest thing to do but given his state during the exercises I doubt he got any wiser from the experience. Well, better now than on a mission, that's my opinion.

The next day passed as days off always do - fast and with little to remember them by. We did invite Hawk (new at Freelance) to come with us to a bar. Not so much a social thing as to spare her from the Demon's Head back at base.

Soon it was mission time. As it turns out, Union Arms was contracted for work on Dukkha - and that was where we were heading. Normally I would be pissed at Eliza for setting us up like this but this time I felt for some action. Autumn was upon us and winter approaching fast - a shitty time at best here in the Fringe. In comparison to 72h of staring at the rain a few bullets might be preferred. Also they did pay well for merc services and there would be none of that moral bullshit. Everyone at Dukkha would be either shooting at you or against your own target. Such simplicity warrants a little danger. As Ed was still caught up in some other stuff involving his grumpy dwarf friend known as Grandpa and Angeline turned up sick we brought Hawk with us instead. Apparently she had some medical skills too and you could never have too many guns on Dukkha.

Less welcome was the secrecy: in what is quickly becoming standard procedure we negotiate payment without actually knowing what we're supposed to do. The price for success I guess. Contract signed the actual briefing took place on the flight to Dukkha. Apparently we had been employed as "problem solvers" - the more problems we managed to solve during our stay the more we cached in. Fair enough I suppose.

Once we arrived it became clear that winter had already arrived in these parts. Erza got split from the group as she was needed for some tactical stuff. For the rest of us we picked up some gear and mounted a couple of terradynes and then headed out towards our first mission: to aid with the clearing of a bunker blocking the way to the frontlines. Someone must have heard of Juron's last visit. Visually he didn't disappoint: fiberplate armor accompanied by a rocket launcher and an assault gun. Every plan I could think of as we drove involved just placing him close enough to the enemy position to let him fire away while me and Lucas tried to prevent the enemy from killing him first. I figured I had to see the site before I could come up with a better plan.

The enemy bunker was located near a summit overlooking a main road going through the island. Strong winds made talking without headphones impossible and you couldn't lay a smoke screen for more than a few seconds. The position nearby held by Union Arms' forces wasn't very impressive; a sheltered camp and a trench in front of an open killing field stretching some 400m. Steep cliffs lined the sides of the field all the way to the enemy bunker. In theory we could climb them all the way and thus stay out of the line of sight but I quickly dismissed that. I'd rather die from a bullet than a sudden drop and stop. The soldiers stationed at the camp was in a poor condition and it was clear they wouldn't be of much use until a very final stage were we could actually rush the bunker.
So... my brain really couldn't see any better options than the original idea to employ Juron as a battering ram and me and Lucas as decoys. Lucas could of course snipe at the enemy positions but me, yeah I wasn't so lucky. The best thing I could do was to paint a target on my ass and run for the little cover that was available just to draw fire. It was a stupid plan but glorious and given that the soldiers had already started looking at us like action heroes I couldn't resist. Life is in the fight after all. I took out my little box of battlefield supplies and administered some bork and vitagel. That shit could save your life.

Well, leaving the trench and running over the field got the adrenaline pumping, that's for sure. There were some incoming fire but running back and forth I reached a large boulder without any problems. Juron, who was supposed to be right behind be, arrived a moment later. He said something about getting shot in the ass but he had already taken a mort so I figured it was ok. We pushed for the next cover, which would get Juron within range. Lucas had already done some serious work, judging from disrupted hails of bullets. Me and Juron got into cover, no problem; now he just needed a clear shot. Someone would have to distract the enemy - and that someone was me. I gave Lucas a heads up and ran for it. Two tracks of minigun fire traced me along the ground - but one suddenly stopped. The moment after there was a blast and a flash of fire from the bunker. Juron had delivered a direct hit. Apex Predators - damn we were good! The soldiers got the order to charge ahead while me and Juron went in first to secure the bunker. After that the only thing left was for Hawk to fix Juron's ass up. I hope it didn't leave a lasting impression on her.

First job done we were summoned back to join in with a renewed push against the frontlines. A fortified enemy camp and the soldiers would attack it from two directions with us joining the left force. The cold kept us sharp and Lucas and I decided to check on the situation. We weren't impressed. Apparently some jerk had decided to storm a 100 gun strong concrete wall-protected stronghold with roughly 80 soldiers divided between the two flanking forces. It looked like a tactical fuckup and in the back of my head I thought that someone would expect us to even the odds. I wasn't surprised to learn I was right - I was however to learn it was Erza's doing. Well, no guts no glory. I figured we'd use the same basic tactics as on the summit: Lucas to keep enemy fire at a minimum, Juron to provide us with the city keys and me and the rest of the grunts to play target practice until we had a way in. At least we would be able to lay a smoke screen this time - which was lucky, as there wasn't any shelter at all for any of us once we started the approach. Did I say guts and glory? I hoped to see more glory than guts once we were through. Bork, vitagel, go!

Haven't been on many battlefields in my life - usually a very poor place to collect a bounty. Can't say I long to go back; there is something terrifying in all the noise, flashes and occasional explosion that reminds me of a dance club but with everyone trying to kill each other instead of dancing. Well, compared to some places in the blocks I guess its not a big difference.
I could elaborate the story I guess, but I won't. It was a battle. Lucas did what I guess a good sniper should do in a place like that and kept the heavy guns unmanned and silent. Juron knocked on the door with his AP rockets and the rest of us, having stayed safe in the smoke curtains laid out, charged in screaming and guns blasting. I was told later it was a great success, which from military lingo translates to "we didn't die so much but the enemy really kicked the bucket". Don't get me wrong - I don't feel bad about it. Everyone on site got paid to do what they did. There weren't civilians on the road as might happen on some other job. It just seemed a bit... pointless. Haven't really seen anything on Dukkha worth fighting for. For all I know it might just be that they're testing guns and armors out there. Both sides are fighting but none are winning.

Well enough of me thinking - usually amounts to no good. We came around as heroes and everyone was mightily impressed. We god paid and were put on a flight back home. Mission complete. But I couldn't quite get one thought out of my head: would it be possible to stop the fighting? Could we, the Apex Predators, tip the balance? It sounded like a worthy cause. I'd pass the idea over to our supreme leader, hoping she'd make a better decision out of it than the one we'd just survived...
Posted by Niclas Ohlsson at 10:28 AM