The last few months have been a bit busy on this side of the screen. Thus frequent posting here just haven't manifested as intended - but there is still hope for the future.

What has been happening with Centuria is some preparations for LinCon 2018. The idea for next year is to host one adventure for each age. Standard roleplaying but each adventure introducing a campaign which will be available for download after the event. That said the intention is of course that it can be enjoyed as a stand-alone experience.

First out is the adventure for the Age of Information (a bit backwards, yes), called Cyberwolf:


The first feeling was cold, then wet. You were naked, lying in cold, flowing water. A sharp light suddenly blinded your eyes.
"This one is alive. Hello! Can you hear us?" In the darkness beyond the light shapes became people...
They were scavengers of the undercity. They introduced themselves as Aiko, Mithradates, Kazane, Bacara and Alexander. They managed to find you some ragged clothes and promised to bring you somewhere warm. But you could only listen half-heartedly, because other things were requesting your attention. Memories of pain resurfaced, but you couldn't tell how long since. And you had cybertech of which you had no memory... What had happened?
There were others too; unfamiliar faces who seemed as puzzled as you were. But all your thoughts were interrupted by a change of scenery.
"Behold! The Hideout!" said Alexander with a dramatic voice.
And the narrow pathway you had been following widened, revealing a huge space only dimly lit by a few electric lights. High above a walkway was barely visible. There were people here you could tell immediately from the noise. Colored lights and makeshift tables created a small marketplace, running along a vast indoor basin. The inhabitants eyed you suspiciously, or at least with interest. You took it in slowly and as your mind began to settle you realized this would be your home for a while. For the first time you turned around and faced the gazes of your companions. Had they been through the same thing? What did they know and who were they? 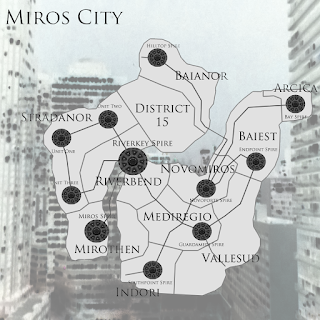 Posted by Niclas Ohlsson at 1:11 PM