Getting back to writing about Age of Steel nations I realize giving each of them a whole post wouldn't be quite fair. As has already been revealed in previous developer posts, many nations have come along just to fit with the stories of the major countries.

The nations known as Arbea and Tala was invented for the same purpose: as ways to create a power balance between Menlor and Damasa. As part of the original lands conquered and settled by the Empire in the Northlands, both Menlor and Damasa have claims on these nations. Both are, however, strong enough to defend themselves in the short term and would quickly ally with the opposing power in the case of an invasion. 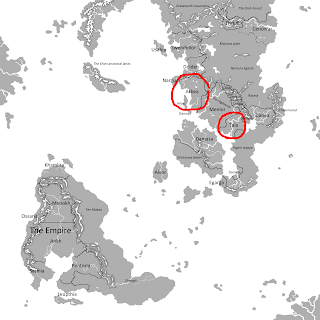 Culturally I modeled them on the idea that Menlor can be compared to historical France. Arbea would then be more like Germany and Tala would resemble Italy. Similar to their sources of inspiration both nations are very decentralized with no single faction able to dictate politics. What I wanted was for both these nations to be intertwined in the Menlor-Damasa hostilities in such a way that it would create opportunities for political/espionage campaigns and also prove an opportunity for minor conflicts where the major powers are involved but not directly deploying troops.

As for explaining their existence, both Arbea and Tala are breakaway nations - areas too far away for the queen of Menlor or the emperor of Damasa to retain control over them during the worst years of the civil war.

Getting thus far in the story what is wanted for both these nations is to make them interesting; they should add something to the world in terms of experience and depth - not just fulfill their intended roles.

Arbea I figure would make a good battleground - tugged in between the major powers to the east and south and mountains and orcs to the north and west. A place for both skirmishes and raids to full scale battles. At this point I wanted a reason for how the country was kept together to begin with as this would provide information as to were the cracks where. I decided another imperial order was a suitable explanation, and thus was invented the Order of the Wolves. While the name had been on my mind for some time I quickly realized it didn't really fit in with a Southland empire. Griffons, lions and falcons could be connected to such an environment, but wolves are more of a northern thing. The idea was then that the order had been created in the Northlands - presumably then for battling the orcs. Again the idea of manpower comes to mind - a shortage of soldiers from the warrior caste prevented further expansion, so the Order of the Wolf was formed, which accepted commoners into their ranks. Thus was the land wrestled from the orcs.

So the order is influential in the country, but it doesn't control it - the land is still a feudal one like Menlor, but without a king or queen. A council of nobles, many also members of the order, collaborates to a certain degree to keep Damasa and Menlor from absorbing them. However, they only stand united against exterior threats so fighting between the noble houses and indeed different factions within the order is quite common.

Tala then seems a good place for political intrigues and trade. Like its inspiration medieval Italy I imagine small city states joined together in a union. Some are ruled by nobles, others by merchants. Since money has more influence than blood both Damasa and Menlor have agents who works from within the country. Then there's also the steppes to the east - an opportunity for civilization versus nomads that can be about both trade and warfare.

All in all Arbea and Tala both end up as rather boring nations in the sense that they don't contribute much to the grand scheme of things - but they are very interesting places for players to explore. The fact that any conflict threatens to draw the attention of both Damasa and Menlor makes sure that there's always something at stake and the decentralization provides a plethora of possibilities for conflicts and intrigues.
Posted by Niclas Ohlsson at 9:49 AM