The presence of avarai people in the Northlands was established very early in my design of the world. Inspired by the european struggles against eastern horse peoples gave birth to the idea of the teghirs, which fitted the terrain with open steppes. The highlanders (also called the asiatsu clans) were inspired by, well, highlanders but also strongly by japanese culture - also two iconic historical conflicts.

The idea for a background was that during its height the Zhengdi empire had started to colonize the southern reaches of the Northlands. The taming of native horses allowed them to drive away the orcs from most of the area. But as the empire collapsed the colonies were left on their own and had to fend for themselves. This created a good story for the teghirs, but not for the highlanders. 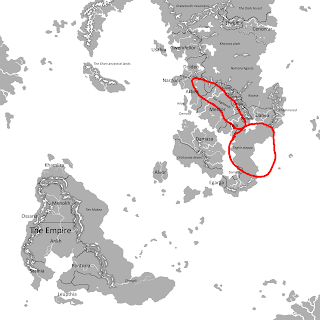 As the main difference between the two was the use of the horse the most simple solution seemed to be that the highlanders had simply been driven from the steppes and adapted to a life in the forests of Gothia. Given the orc presence there this would have been dangerous so a strong incentive was needed. A civil war seemed plausible enough; as the central government of the colonies collapsed war tore the land apart and those who didn't want to bow to the warlords (who, naturally, favored the horseback) were forced to seek refuge elsewhere. The dense forests of Gothia prevented the teghirs from pursuing while it was also free from gothic settlers, who preferred the more fertile lands to the south.

From this point, everything about the highlanders and the teghirs is really trying in as many cultural references as possible. Both to create a depth for these peoples but also to spark imagination and help game masters bring them alive.