I created Damasa to be a rival to the nation of Menlor. As I envisioned the two to be the major powers of the Northlands and so I imagine their conflict was similar to that of France and England during the middle ages, with the Damasa strait making it difficult to hold on to any gains on the other side. 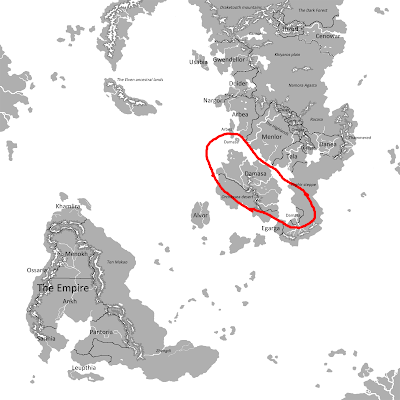 The first thing was to design a reason for the hostility between the nations. I had already decided I wanted the nations of the Northlands to be multicultural (that is, several human cultures present) so it was logical that they would have a common ancestry. I envisioned that human civilization had been spread north from the Southlands by a great human empire that dwelled there. To give the nations claim on each others' lands I decided that most human nations in the Northlands had once been part of the same empire. As two factions came to claim the throne a civil war lead to the rise of several independent states.

With a story in place, I could build on that foundation. Geographically, it made sense for Damasa to be the first place for humans of the Southlands to make landfall (as Alvor was already set aside for the elves). Thus Damasa would be the heartland for human civilization in the north; resembling the Empire in the Southlands in both architecture and culture. I wanted it to be a contrast to Menlor on several levels and though I envisioned the queen of Menlor as the rightful and just ruler I didn't want to create a black and white scenario with Menlor being the good and Damasa the bad.

I found a good place to start to be the government. If Menlor was a feudal monarchy then I could make Damasa something like a republic or democracy? Inspired by the Persian-Greek conflict of antiquity I decided that if Menlor was inspired from France and the Empire would be some Roman-Persian mixup then it made sense to give Damasa a greek-inspired culture. So I made Damasa a meritocracy, though under the rule of an emperor which was largely seen as benign. As this image more and more clashed with the very traditionalist plans I had for the Empire I needed an explanation. The traditional factions of the Empire I had imagined as wizards, the army and the Temple. Given that I intended for the emperor to be a wizard it made sense that the wizard faction would be on his (the emperor would be male to balance out Menlor's queen) side. As the Temple was a moral institution with strong ties to the queen they would be the emperor's enemies. It seemed plausible the emperor would have banished them from the land (perhaps to gain the favor of the wizards?). Granting its wealth to the people could have prevented civil unrest. Then remained the army. As the emperor had managed to force the queen from the northern heartlands it seemed logical at least a large portion of the army had been on his side. But it was hard to imagine the traditional generals happily going along with the emperor dissolving the Temple and openly flirting with the wizard faction.

This created the foundation for an internal conflict. I imagine that to overthrow both the Temple and the army in one go would have been too much. The sensible solution to such a problem would seem to keep both sides content - and historically soldiers are best kept from causing trouble at home by being abroad fighting. As this suited the storyline just fine it was a given choice: the emperor sent his soldiers forth to try to claim all lands in the north for himself. But Menlor's knights would have been quite effective against legionnaire style infantry forces. The emperor is running low on troops but military tradition prevents him from recruiting freely.

This is really a turning point in Damasa's history - both in-game and off-game. Having reviewed what has been written so far I decide to postpone Damasa's cultural revolution. The emperor claimed power through adhering to the Empire's traditions, not overthrowing them. Those who ally with the emperor do so because they see themselves as part of the Empire and want to remain loyal subjects. This doesn't change the end result however; the emperor still battles the queen but starts to run low on soldiers. What does he do? He's a powerful mage so one response would be to summon an army - an army which is not so susceptible to attrition. Undead fit the bill just about right. So the emperor turns to raising undead and the whole war turns into a horror story. Great background stuff!

So how to merge this with that democracy-social revolution idea? Well, it seems likely the emperor gains more and more enemies over time. The Order of the Falcon eventually manages to assassinate him (they are on the queen's side anyway). Then what? With the undead falling apart Menlor gains the upper hand. Damasa is still strong in wizards but it needs a new army. A new emperor rises and appeals to the people: it is time to throw off all those who wish to rule them and create their own nation! The Temple is friendly towards the queen so gets thrown out. The wizards are the most powerful faction so they offer to assist in return for more privileges and autonomy and the remains of the army grudgingly joins the people and fight off the invaders. Almost there now!

Naturally, as the country is restored the army wants to reclaim its former position but the new emperor realizes this could lead to the same scenario once more and refuses. The new army will be raised from the common people. In protest the remaining soldier families decide to leave the country - they will then be the foundation for the militaristic state of Cenowar. But Damasa is now where I wanted it: it is a nation with a strong sense of national pride, a strong wizard community, a reformed army and with little or no influence from the Temple. In a sense the historical roles have been slightly reversed; Damasa now resembles revolutionary France while Menlor would look more like England in the Hundred Wears' War.

We're on to a great start!
Posted by Niclas Ohlsson at 8:37 PM