Making a short sidetrack from our odyssey over Age of Steel countries I thought it fitting to delve into the mortal races before we continue any further. After all they are the very basis for how many countries and conflicts have developed.

Now, I intend to go into each race in detail so let's just start with a little discussion over why there are different races in Centuria to begin with. I want to explore different social settings in this world - including racism but also society without racism. Having different races allows me to do this, while at the same time highlighting both the hypocrisy and the necessity in deciding boundaries. We can have a society in which skin color doesn't affect your social status while still picturing social conflicts between different races. 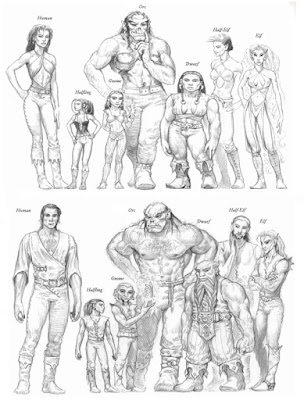 Claiming this image off the internet to represent the "classical" fantasy races, my idea for Centuria was to create a world "easy to jump into" yet still with a few twists to make it unique. Also, I wanted a plausible idea for how the different races had gotten there to begin with.

Elves, dwarves and orcs thus get included pretty much by default. Now, the idea goes something like this: human evolution can pretty much be based on what happened on Earth. Dwarves I decided to portray as a different hominid and since the classical image that dwarves live in the mountains makes it unlikely they moved in overnight I decided to make Umarald their ancestral homeland. To have the humans migrate into the area is a quite plausible idea. Orcs then would also be immigrants - from the south, as many of their characteristics (dark skin, night active) fit better with a tropical environment than coming from the north. Now the elves; they are a rather advantaged race (being almost immortal and stuff) so there must be some explanation as to why the elves are not controlling the land. And, looking ahead, there's also a need for a good explanation as to how all these rather unique races appear in Umarald for some reason. My idea then is that the elves were created - from humans - using some sort of magic. Maybe demons were involved, maybe not. Regardless, this would provide a good reason for their abilities.

Now, then, the very idea that magic could have created a race can be used to explain a whole lot of weird creatures in the world. I build on the idea that the elves, having discovered this could be done, transformed into all sorts of creatures: centaurs, minotaurs, worgs. And to create that little twist, why not introduce some friendly dwarf-elf relations? The gnomes, as usually described, form a rather perfect combination between the two? So we'll have some gnomes too based on this.

Great - we have most of the classical races and some explanation as how they came to be. Hobbits/halflings? I don't really see them adding much to the setting at this point and getting one more race to explain just seems a bit unrealistic. So, to still give the term some meaning I reinvent the "hobbits" as surface-living dwarves with a different social structure. Perhaps we'll see halflings in some future expansion (the world of Aladron is large, after all) but for now this gives us something to work with.