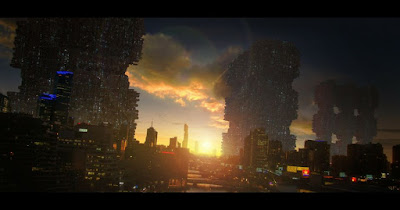 I've learned not to be surprised in situations like this. Ok, Freelance's boss was heading out - now what? Both Demon's Head, Silence and Hawk where there. Keys and passcodes lay on the table and Erza moved towards them - only to be intercepted by Krelik. So that was how it was going to be.

About 30 seconds later Ed and Joshua where pointing guns, me and Jiang-Pfengh were holding grenades. Oh, and Silence had somehow slipped out of the building. Given this it was slightly unexpected to find ourselves in Elizah's office a few minutes later, going through the paperwork. Less unexpected was that Erza had apparently gone for the position of chief not so much because of her great managerial skills but more out of pride. I'm no paper-pusher but I know there's more to this business than meets the eye. Fortunately the common opinion seemed to be we should hire someone for the administrative stuff. Ed contacted his hacker/love-interest to get some suggestions.

Next thing on the schedule was to find some work. I lay forth my theory of GERO negotiator Abriel's "bodyguard" being involved in the fishy business we've been investigating. Yes, it would be a big gamble - but you couldn't go far without taking big risks. Particularly Ed seemed reluctant to commit without knowing the possible gain - a statement that in my opinion would get us no further than standard escort jobs until the end of time. A middle approach was decided when it turned out Juron had been contacted by Joline again; we'd check if Erza's contact Ruben would be prepared to pay us on learning the assassin's identity and then go speak to the Clans on the following day.

Me, Erza and Ed went to speak with Ruben that same evening. In hindsight it would have been better if it had been just me and Erza - just saying. As we had hoped to get a bounty offer on the assassin we were disappointed when Ruben decided it was too big for him with GERO involved. To see what we could get out of it I put forth the suggestion that we might know someone who could handle it - the assassin known simply as K. Ruben agreed it was worth investigating so we set up a meeting early the next morning and were offered to stay over the night as guests. As we were practically heading next door for our visit with the Clans we sent a message to Lucas and Juron, informing them of the situation.

The following morning K showed and even in an indoor setting it was immediately apparent he wasn't anyone to trifle with. He was prepared to kill Abriel's bodyguard for Ruben, but the price was 28k. I suggested I go talk to him as I didn't think we could handle the negotiation through Ruben anymore. I think K recognized me and I asked if we could think the offer over but he seemed to consider this a waste of his time. Given I came here to gain money - not spend it - I decided to decline. I knew this would lead to some discussion but I couldn't see how we would benefit from the deed in the long run. After all, the bodyguard was just one piece in our investigation - her death would not mean check mate.

After K had left we rested until Juron and Lucas arrived in the Blocks. The meeting with Joline was, as expected, more of a forced recruitment as it would appear she now had a hook on Ed as well. At least she gave us a number of jobs to choose from. Though dismissed at first due to our last experience, we eventually settled for an armed transport robbery. It had the best opportunity for cash - 200k in a best case scenario - and the guards would be armed and prepared for combat. Apparently this meant killing them were more ethical than killing some politician who probably kept hundreds starving and dying due to a lack of medical care. Well, I made it no secret I don't like working for the Clans but given the situation we're in it seems stupid not to go all the way. Either we make it or break it and I must say I enjoy the opportunity of finding out.

But the day hadn't given up all its opportunities yet - as we returned to Freelance we soon found Abriel (and that bodyguard...) knocking on the door. She wasn't offering us a mission this time but rather a full-time employment for several months. With so much options I couldn't help but wondering: how soon would things start to go bad again?
Posted by Niclas Ohlsson at 11:09 AM