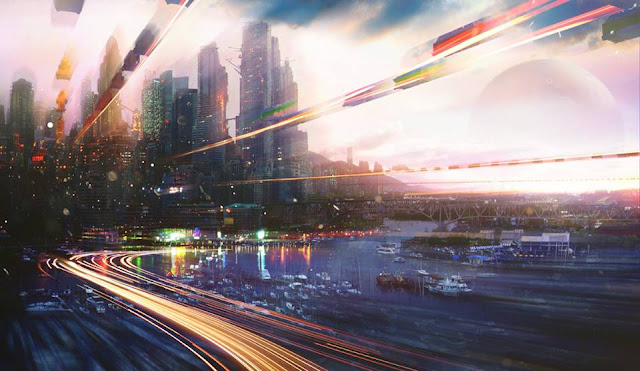 Finally it came down to some real business. After a lengthy discussion (several minutes, I assure you) about how to handle our resent clash with the clans we decided that in order to make money we had to spend money. That is, we pay our debt and then we check if there's some interesting money to be made from those fuckers until we decide we have the means to settle scores. Encountered the usual "I want to follow the law"-kinda talk - as if there is such a thing as law in the Fringe. Thankfully, but not entierly surprising, Silence turned out to be able to help - both with paying off the debt and getting us some action. It seemed like a one-time offer though, so I took the money before anyone was stupid enough to turn it down. Pretending to have a plan with it seemed enough to have everyone tag along - a bit more literary than expected as I intended to go myself but got Erza and Juron as a tail.

As usual we had a day off after work so we used it to settle our debt. Also, Angeline was scheduled to be released from the hospital so Ed volonteered to pick her up. It wouldn't surprise me if he told her something stupid, but hey, that's not my problem. In the end we all ended up at the Mint as the debt had to be settled in the Blocks and only Juron had the stomach to eat some of their food. It felt strangely satisfying to be all together again, Lucas' arm excluded of course.

All in all, it put us back 5'000 creds (apparently the clans charge extra if you kill their goons) so pressure was on when getting a new job. We decided to go with GERO, thinking staying in the game with them could do us credit (hehe) in the long run. It quickly turned out we were right; not only did we get better-than-average salary; they also produced some high-tech rebreathers as freebies. It was a scouting mission so it also felt as we knew what the difficult part would be. Driving - check. Scouting - check. Reading the damn maps - fuckit. We were right.
But against all expectations, in the middle of finding out where the fuck "here" actually is, we stumble upon a giant lizard. Charging in, Erza brought it down with two well-aimed shots to the head. Checking it out Angeline - she's really like throwing a die that girl - believed it to be a giant bluestone lizard. Given that their poison glands sell for 5k - that's 5-fucking-thousands - it was like finding a real phoenix in the junkyard. Stepping it up we even managed to finish the job on time - every second counts - and thus it seems as we made some big money on this one. Feels good to be doing some real business again.
Posted by Niclas Ohlsson at 11:47 AM