Kragor the Merc: For a Stick Full of Credits 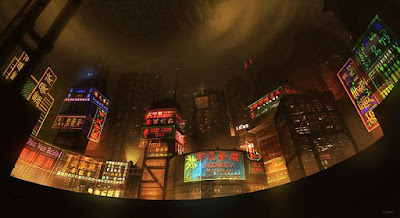 It is never a pleasant experience to get shot, but for the right amount of cash...

Its been a busy week. Getting back from the last run we set out to sell the raw poison we acquired. Staking the streets proved fruitful and we found a dealer with the necessary means. 8 grands switched hands as we agreed to make a second delivery in order to keep the price up - left that one to Erza as I won't have her make me responsible for any more business deals.

Our day off turned into an exercise-regime managed by the Freelance android Siri. Fucking bone-breaker but I'll be damned if I turn out last (or second-last; Angeline doesn't really count...). Meant the rest of the day got reserved for a long shower and some extra sleep. We had been expecting Lucas back with two arms today, but apparently there was some complications so neither of Lucas' arms would be there to aid us in the upcoming days.

The day after that it was mission time and given our agreement with the street dealer we aimed for another GERO scouting gig in the hope of finding lizard. Well, the scouting went according to plan, but no beasties this time. We'll just keep trying.

Back at base it seemed as if Elizah had gotten another contract for Dukkha. It would go to the first team to volonteer (Juron actually seemed eager for this, but he was rather alone in his opinion) or the team scraping the bottom at the end of the month. That would of course be us. Erza expressed some idea about paying all our mission money to Freelance to let us bail, but fuck that. I take these jobs for credits - I don't pay them back to get less work. If we'd end up on Dukkha that was how it was going to be.

As on queue we got a meeting with Silence - the fruit of our little mishap with the Clans. It was a big gig, worth 100 -fucking- thousand credits. As expected Silence wanted a lion's share, but who was to argue? Even with Freelance getting it's share it was going to be plenty for each of us. The mission itself was to wipe out some clan renegades who had a walled camp out in the wilderness. It would certainly require some gear upgrades but even so leave a decent sum for the bank. Not that money tended to stay there for long but I do know my account enjoys the occasional visit anyway.
With Silence covering the basic necessities such as food and transport we were given free reigns to discuss the assault itself. At this point it became apparent that particularly Ed and to some degree Angeline had problems doing this kind of job. Some fucking moral-bullshit talk again - I don't get how these people see the world. Its the Fringe for fuck's sake - everyone is guilty of something. And these were not only outlaws - they were outlaws outlawed by other fucking outlaws. They were about as guilty and unwanted as anyone outside a tax office was ever going to be. Luckily we managed to steer up the situation before Silence took back her offer.
Back to the planning Erza had the idea to use explosives to take out the camp's generator and vehicles. One of two towers were to be cleaned by Silence with a sniper rifle to allow us entry, as apparent minefields prevented us from planting anything outside the walls. At this point Ed came with the brilliant idea to use gas grenades to further add to the confusion. Admittedly, he probably thought of tear gas or some nonsense like that but it only goes to show that any idea can be improved upon. Poison gas it was. So the final plan was for Silence to snipe the towers, Erza and Juron to wreck the generator and vehicles, Angeline to launch gas grenades into the camp using a mortar and me and Ed to provide support and work on the body count. That is, I figured Ed would support the others while I worked on the body count. Figured he would feel better about it that way.

It was a 24h drive to follow - one that Silence did all on her own. I got the feeling some part of her had the urge to impress us, while the other simply did things as it was used to: going solo. I don't complain.
Reaching the site we waited for darkness to make our approach. Seeing everyone in their full combat gear - even Ed had purchased an armor - with night vision and everything sure was an impressive sight. I looked forward to the thrill. And then it was time.
Silence did her part and we started climbing into the now unmanned tower at the corner of the base. Juron proved to be less than friendly with the climbing gear and was forced to wait for us to open the gate instead. Meanwhile me and Ed got down the tower and took up positions. Then Erza blew the shit out of the generator. Things started to go fast. There was a shower shed between me and the barracks, so I pulled out my brand new silenced pocket pistol and went to clean it out. Next time I'll use the fucking semi-mode on the thing, but with a little luck and a shot from Ed we had two dead outlaws who never got off a shot. Moving on I switched to my other purchase for the week: an auto shotgun. Had been wanting one of these for years and it seemed perfect for the job. At this point Juron had apparently tired of waiting so blew up the whole friggin gate. I think some of the dazzled thugs coming out from the nearby barracks saw me in the light of the explosion and we started exchanging fire. It became a blur from there on. Some part of me registered getting shot twice but it was not until it was all over that I realized one of the injuries was rather serious. I must have killed close to ten people in that short time span - didn't really think about it, just let the shotgun blaze. It was the price to pay for the money we earned. Two gunshot wounds and a shit-load of ammo.
Posted by Niclas Ohlsson at 8:43 AM