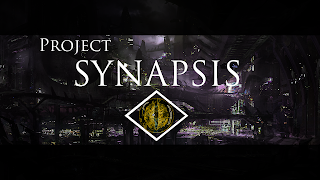 Unless I'm misstaken, Project Synapsis was the first campaign I ran in the Age of Information. At this point the rule book was still under revision and I remember quite a lot of the gear lists grew rather substantially during this campaign...

Set in the gnomish city of Noravon with some 75 million inhabitants (mostly humans) the initial plot was for the characters to be recruited by remnants of the Order of the Falcon (an order of assassins and spies from previous Centuria ages, still active in the city) and given high-profile clandestine missions to accomplish. The whole setup was fairly inspired by the Shadowrun setting - though unlike Shadowrun there's less place for sword wielding samurai and magic is not so overtly used.

This is usually how I begin a campaign: with a concept idea with some thought through realism. I choose a mission approach because its easier, from a story perspective, to handle players not being able to join a particular session.

The next big obstacle to tackle is group cohesion. From my experience the best roleplaying requires a balance between internal conflicts and cooperation. Obviously you don't want a group that will tear itself apart from internal strife (at least not for campaigns...) - but equally bad for story telling is a group where everyone just stick to their role and never interfere with the others. But yeah; its usually the conflicts that become a problem...
In this campaign there was an additional dimension to this issue. As the characters were recruited by the Order of the Falcon it seemed likely that a) the Falcons did a thorough job in assessing the people they planned to recruit b) the Falcons would pretty much kill off any team that did a poor job. Thus I felt it very important to get the group cohesion as right as possible directly from start.
The obvious path to achieving this would have been to let the players in on the story and have them design their team together - but I didn't want that. I find there is too much roleplaying to be had and experienced in that first encounter between players to take it away. Also the uncertainty about what business they are getting involved in adds for better playing.
The route I took was to run a single player mission with each of the players right after they finished creating their character. Not only did it give me good intel on each character but also gave each player a chance to test out their skills and really find out what their character was good at. It took more time obviously, but was worth it all the way.

The characters that emerged during this campaign deserve some space, so I'm going to give it to them. This was one of the few campaigns were I really experienced all characters growing; picking up skills and challenging some of their own viewpoints.

Darnell Lambert, shifter name Deco, would end up leader of the new team. A mind for details (not to say pedantic) and slightly paranoid, Deco always emphasized the planning phase of any mission. Preferring stealth he avoided violence when he could but was lethal when required. He used quite a lot of drugs - both as performance enhancers and for recreation after a mission. During the campaign he would develop from proficient spy to nigh-undetectable, brooding assassin.

Loric Winkler was a talented but somewhat laid-back hacker, who also tampered with hardware. His role as the group's techwiz was quite given right from the start, but an interest in heavy weaponry and robotics would provide plenty of flavor on multiple occasions. Its easy to get stuck in improving on what you're already good at with a character like Loric, but he successfully developed new skill sets during the campaign and put them to good use (suppressive fire wasn't one of them).

Renna Moneaux, shifter name November Sun, was a middle class wage-slave working in the underworld mostly as a rebellion towards the rule-governed corporate world that otherwise occupied her life. Unlike the other members of the group violence terrified her and she wasn't very good in social situations either. What she lacked in these skills however, she more than compensated for with her brilliant knowledge. Her speciality was cybertech and medicine, though she was generally good with any hardware and electronics. It was a very brave choice to play a character like Renna in a campaign of this type, but she provided so much depth to the group. She was a constant reminder to how most normal people reacted to violence of any kind and I believe strongly influenced the group to stick to low-profile solutions whenever they could.

Jack "Ratman" Reacher was a low-ranking security officer employed by Mashnar Security Corporation - one of the major such corporations in the city. He moonlighted as muscle for the simple reason that he needed the dough and his in-depth knowledge of security setups in general allowed him to do so quite well. When he couldn't bluff, talk or walk through an obstacle he was also more than proficient in a number of firearms. Naturally he became the group's fighter, but his corporate background coupled with a very vivid family description (wive and three kids) gave him a depth many characters (to my experience particularly fighters) lack. He would form sort of the backbone of the group and had a very interesting development when reaching the point where the money they earned more than covered the reason he was working a double in the first place.

Huang Sun, shifter alias Dai Kau, was to most a respectable businessman - a facilitator working for a mid-sized economics corporation. However, part thrill and part gambling debts had pushed him into an underground career as well. A social player he knew how to deal with people and to weigh costs to profits. Despite this he had a rather low profile within the group - preferring to play out his social skills when needed rather than live and breathe by them. As an avarai (different etnicity to the other characters who are all goths) Dai Kau brings some interesting connections to the group. Through a personal side quest involving his family he is probably the only member of the group to actively choose to leave a "normal" life behind and submerge himself totally in the shifter life.

As a Game Master, the most effort I put into this campaign wasn't into the main story itself. The main story was pretty straight forward; a corporation had stumbled across an enormous dormant dragon within a mountain far to the north. They sought to implant technology into its brain in order to extract information from it. One of the leaders of the Order of the Falcon had uncovered some intel on this operation and was eager to learn more, but without alerting her peers. Hence the characters were employed to collect data but without being given any real insight into what was going on.

So this story could run its course in the background without much work. Instead what I probably spend the most time on was keeping tabs on each characters' private economy and, for each in-game month, writing a little text about things that was going on in a character's private life and accompanying this by news bulletins about things that might or might not relate to the overall story. This turned the whole campaign not so much into an action adventure but rather a sort of documentary on the lives the characters were living. From their eating and sleeping habits, landlord problems and family arguments (some more serious than others). The depth this created behind each decision was incredible and is probably the reason why I still, more than 4½ years later, still love to incorporate or reference these characters in other campaigns we play.

I believe I've written lengthy enough on this subject now. As for the story the characters would eventually shut down the whole dragon-brain surgery operation - but not before that same dragon had been awoken. This would form the plotline for the sequel: Will of the Beast.

These quotes and comments have been collected from the players who took part in the campaign.

"...One of the most difficult jobs we've made but we pulled it off perfectly. At least until we reach the vault; Ratman forgets to reach for his scramble grenade and Sun informs everyone that the guard turrets activates if they detect elevated anxiety."

"Deco's stated philosophy of not killing people - followed by someone getting killed by Deco."

"It was fun that everyone was so engaged in their characters and regularly posted texts where you got an insight into that character's life. Many were quite secretive, but the texts kept the door open for us to watch."


"We are to kidnap a gnome protected by heavy security. How do we solve it? We exploit his passion for avatar games and pretend to offer him a place in the big league. He practically comes running to us after having ditched his own life guards. We capture him without leaving a single trace."

"My best memories are the relationships between the characters. How Deco tried to control the group by ordering Ratman to take off his hat. I remember Deco hiring Sun to surgically implant a drop stabilizer in his body, done in her storehouse. I remember Loric's reoccuring scornful comments to Ratman, Sun's and Loric's tech race and Dai Kau's mystical relationships."


"Deco is the character I have felt the most for. Thanks to a great depth in private as well as professional life he became alive. Drugs, the monobike, the flat, the secret locker, the contacts and the feeling of endless city around him and how he was but a drop in the ocean was epic from a roleplaying perspective."

"Remember that half [of one] mission was for the group to prevent Loric from blowing things up. The other half Loric used to invent the computer virus 'Sesam' which could later be used to open all the gates in the area so we could merge with the crowd and just walk out with everyone else heading home from work!"

"Ratman is the most vivid character I've played. That he had a family which he loved and wanted to give a better future gave him huge depth and complexity. It also made it challenging to play the character as he lived a double life. Also it was impossible to put everything he earned to improve the character. I remember when we got a big paycheck and everyone else planned what cool stuff you should buy. I bit my lip and placed almost every credit in the children's education savings account."

"I remember scenes where we drove detours to shake pursuers, long planning meetings in the secret hideout and cleanout of autos we've used."


"I remember Ratman's promotion. Fun in a personal way. With an upcoming promotion at the security corporation Mashnar, Ratman's life is being reviewed by a very thorough gnome. Afraid that his double life would be exposed, Ratman calls in his colleagues which plant evidence that the gnome is stealing corporate secrets from Mashnar. The poor devil was gone very quickly."
Posted by Niclas Ohlsson at 8:29 PM