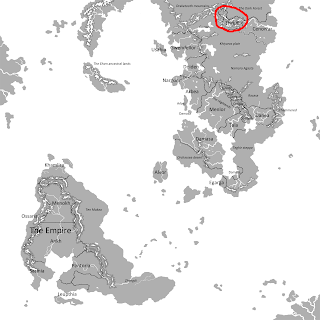 Off-topic note: It's been a while now since last post - lots of stuff going on (mostly on the positive side). But here's finally the finishing piece for the Developer Diary for the Age of Steel.

Last out in this series of Age of Steel nations and civilizations are the Northern Dwarves - represented by the kingdom of Thzud.

The kingdom of Thzud exists in the setting for two (three?) primary reasons: firstly, the already established Southern Dwarves are stated as colonies - thus a colonizing nation must exist. Secondly the human kindom of Cenowar is awfully isolated on the north-eastern coast so I needed some point of interest for it to interact with (apart from the monsters and mysteries of the Dark Forest). The hinted third reason is really a derivate from the first one; as the Southern Dwarves are colonies they lack some of the ancient luster that often surround dwarves in fantasy. Since that's an aspect I want available in the game, Thzud will fill that role.

It is a rather straight forward idea - and also quite fitting - to imagine the northern dwarves as more extreme than their southern cousins. Their city is older (and thus grander and more populous), their traditions even more integrated into the fabric of society and their legacy puts them on the very top of the who-interprets-the-scriptures-correctly pecking order (though they are too distant to their southern cousins to enforce this viewpoint).

To preserve the mystery of this kingdom, Thzud is chosen as an isolationist state. Granted that the most(?) logical explanation to having a whole city underground is that its people is seeking protection from the outside world this seems very plausible. However, to give the state an "in" into the game a limited trading contact with Cenowar is established. This doesn't seem unreasonable as Cenowar is also a very traditional state (at least by human standards) which has quite a few common viewpoints with the dwarves. The only other relation possible would be that with the elves to the west. Quite frankly I've left this one open with an abandoned dwarven city to separate the two. Was it a war? Or did the two races never meet as goblins overtook the dwarven outpost? Something else? Its just the sort of non-critical (from a game design point of view) relation I want to leave to a Game Master to develop to fit the preferred narrative.
Posted by Niclas Ohlsson at 6:03 PM