Kragor the Merc: Not just another run 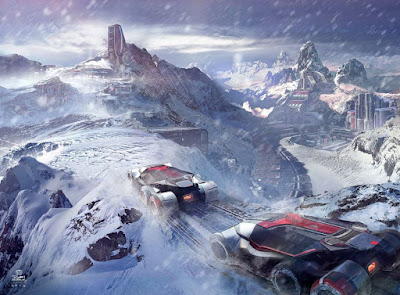 It was the longest and most hellish countdown of my life. I've worked for some pretty fucked up people over the years, but seeing it on a grand scale... people never cease to amaze, that's all I can say.

We did jobs for GERO for a week - mainly patrolling the area and driving other people off the land - waiting for the damn Falcons to give the go sign. Every time I saw Boyan my trigger finger itched.

Then came the day, or rather evening as we had already pulled a full day's work. The hot-shots from GERO showed up and picked us for two top-notch escort vehicles and sent us off to a pick-up site. Boyan and a lady friend of his with similar levels of empathy was calling the shots and split us up between the vehicles. To my disappointment I get to go with the lady. With me was Juron, Erza and Lucas.

The drive to the pick-up was uneventful enough and would prove our only chance to get some sleep for quite some time. The place seemed to be some type of old facility - probably abandoned due to a fire. There were quite a few other mercs there, watching as we arrived. A truck was added to our convoy and we took position behind with Boyan and his team in front. Another long drive awaited - but now we were instructed to stay sharp.

I saw something behind us, probably because I expected to see it. Juron appeared to notice it too. There were at least two monobikes following us - and I could swear it was Hawk riding one of them. What followed wasn't a high-point in my career as a tactican, but I guess after the Falcons keeping us in the dark I wanted something to happen. I alerted our superior to us being pursued and she ordered the vehicle stopped and us to move out and take up positions. I wasn't the only one to be trigger-happy it seemed, for practically as soon as we'd gone out Erza gave the word to terminate our leader. Juron was quick on the notes and despite whatever job GERO had put into her she went down in a few seconds. The driver, who'd seen what had happened was shocked and I guess not to leave any loose ends we put him down too.

As Hawk and her companion rolled up they pointed out that we'd put ourselves in a bit of a conundrum. They wanted to know where the current cargo was heading - and GERO would probably have some difficulties trusting us given what had just happened. To be frank, I didn't give much of a shit: I had just got the opportunity to hammer someone who deserved it badly. The fact that the Falcons didn't tell us what they were planning was their fucking problem - we did our best with what we were given. On that note I called in and reported the casualties. Boyan sounded less than convinced, but told us to stick to the mission. I took over the driver's seat and soon we had caught up with the truck.

We drove for quite some time until we reached another installation which reached into a mountain side. It looked mostly like some type of mine with a few hastily constructed buildings with a small concrete wall with a watch tower protecting the entrance to the mine itself. We were taken to the barracks but weren't given much rest. Boyan came around and picked out Erza. I wanted to follow to see what was happening, but at the same time I didn't want to jeopardize our position further. But a few minutes later Boyan was back - without Erza - and this time he took Juron. It was clear some type of interrogation was going on and as I knew deception wasn't the prime skill of everyone in our team it smelled like trouble. Charles, speaking for the Falcons, agreed but insisted that he attempted to rescue our team mates while he tasked me, Ed and Lucas with blowing up the entrance to the mine.

We didn't get far until we were set upon by Boyan, who silently knocked Ed out of the game. Our excuse that we were just out to take a late night shit didn't quite go home and he tried to put his knives in Lucas, who elegantly backed away. As for myself I had been prepping for this moment for a damn week. The shotgun was in my hands almost before I knew what was happening and I pulled the trigger hard, basically turning the bastard's arm into minced meat. It didn't stop him and instead he turned his focus on me, but I had expected this should he survive and managed to dodge every attack he made. Next thing Lucas perforated his skull with a well-aimed shower of magrail bullets. Unfortunately my shotgun fire had put the guards on alert, but in that moment I was way too high to feel down. I put another round of bullets into Boyan's corpse before we dragged the unconscious Ed into the woods and started to make our way towards the mine entrance.

We managed to find some sort of mining vehicle which we used to create a ramp over the concrete wall. Inside we hid in a shed which proved to hold just what we needed: large cases filled with explosives. Unfortunately they were securely locked and while we managed to bring them into the mine our best option seemed to place them and then fire away and hope it worked. At this point the Falcons made contact and provided a better option as soon we had Hawk at our side.

Apparently the others had been busy, for our supposed sniper cover was busy elsewhere. Good thing we had a sniper of our own. Once the charges were set I made a run for it, while Lucas did a good job in taking down anyone posted in the watch tower. I understood from our com-channel that there was a communication disk that needed to be taken care of before we could call it a day and apparently that was what all the fighting outside was about. I saw a couple of guards near the disk and decided it was a good time to play a stupid orc, so shouted something about explosives in the mines and sabotage. It got their attention but before I could capitalize on the situation someone shouted "Juron, Fire!" on the com and that could only be translated as 'run like hell'. The com disk exploded in a million pieces as I threw myself towards the ground. Soon after the mine itself went 'kaboom'.

Even then, there, lying on the ground with bullets and small pebbles flying all around and pieces of broken equipment burning it felt like a B-rated action virex. But it was a virex approaching the end; those that needed to be put down had been put down and that which needed to be blown up had been blown up. Affected by this strange feeling the next couple of minutes felt like everything happened in slow-motion, with every sound as heard through a wall or a pillow over the ear late at night. But soon we found ourselves in a terradyne, driving away - back towards the city.

It would be the end of the adventure.
Posted by Niclas Ohlsson at 1:07 PM