Kragor the Merc: Lost and Found 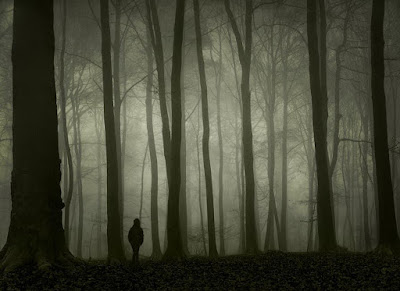 Damn forest. Damn sinkholes. Suddenly the ground disappeared and everything went dark... I don't know what part I landed on, but it wasn't a soft landing. All voices seemed distant; had the feeling that I've fallen into water, but it was all dry leaves around... Truth be told I don't remember much until I looked into the headlight of a jeep which winched us out.

On the way back home there was talk about ruins and spiders but I couldn't make heads or tails of it. Apparently I had a concussion. I hadn't felt so useless since Sora managed to shoot me in the leg - and that was ages ago. I healed up pretty well that time, but this time I don't know. Curse getting older!

Rosina did the best she could and I sleep off what was left the following day. We sold the poison we collected but Erza still wasn't back and it was getting time for a new job. Even the money didn't really seem to matter. I needed time to think...

Partly blaming the concussion, which in truth wasn't so bad anymore, I stated I'd do a solo job. Something nice and easy. A good thing with rarely questioning others is that they rarely question you, so I took a standard gig for Grootgrond and headed out. It was first when I was packing my stuff I found the biomod I bought from Rosina a few days ago. Was it worth it? What difference would it make? I let it stay in my stash.

The job was an escort - food and other supplies for Iron Hill. There were five other mercs on the job; had worked with two of them before prior to the Apex Predators entering the scene; they were known as Rus and Keg (yes he drinks. A lot). The other's I'd seen around. Nothing special, but at least you got what you expected. I took the rear post in our three truck caravan. One of the mercs made some comment about it was where my face belonged so I accidentally discharged my shotgun at the ground next to his foot. He shut up for the rest of the trip.

As we were moving out it dawned on me I hadn't really thought about which direction I was heading since me and Keria survived those double-crossing bitches in the forest. That was 18 years ago - hard to imagine. After that, things had just happened after each other - it had been an easy ride to just tag along. But what did I really have to show for those years? The credits are gone, that's for sure... a few more scars but it's not like anyone would notice outside of the face. A few contacts for sure, but Keria doesn't like me more than she has too, Zima doesn't bring as many jobs as he used to while Kronaug is about as useful as he's ever been. There is of course young Mr Blackbourne but haven't heard from him in a while. The more I thought about it the more it felt like the world was trying to give me a hint. "You're old, you damn fool. Sell your stuff and take a job as a guide for some new team who don't know half a thing about the Fringe. Make enough money and leave this shithole behind." It was tempting and this made me pissed off. Yeah, right, like you'd have any of that money more than a week. But what the fuck else could I do?

Eventually we reached Iron Hill, just at the break of dawn. It was a sorrow sight. Other mercs were handling security and while money seemed to go into new fences the workers didn't seem to get much of it. This is what the Fringe do to you: it gives you credits, but never enough. You work your whole damn life but still you're somehow always short on credits.

We off-loaded and turned the trucks around, accepting a second cargo going back to the city. The drive continued. So what was it then? Well, fuck it, I thought. No one knows the future - well maybe some half-crazed mage staring into some pond somewhere. But other than that. Something my mother had said to me on a bloody night in a very different life... "We prove ourselves to the gods so they know where to place us when we return after death. Until then we fight on". Never believed in any damn gods and I'm pretty sure death is quite final for anyone but the super-rich. But you never know... There was a biomod in my stash back at base. It was a start. Well, curse all the gods and the world with them! I am Kragor and I will go down in a fury of bullets. The Fringe may take everything, but I'll give it a name to remember...
Posted by Niclas Ohlsson at 1:46 PM