Charon, Horacio and Thriatos prepares to delve deeper into the cave by casting the defensive spells at their disposal. The huge tracks are easy to follow and as they venture further into the cave they notice not all of it is natural as they wander into a massive, man-made corridor. The corridor takes them to a stone bridge taking them above an impressive underground cathedral. Gigantic columns rise from the darkness but their eyes are not drawn to the architecture but rather a dim light visible at the far side of the bridge. They hurry to cross, but a strange creature suddenly appear to block their path. 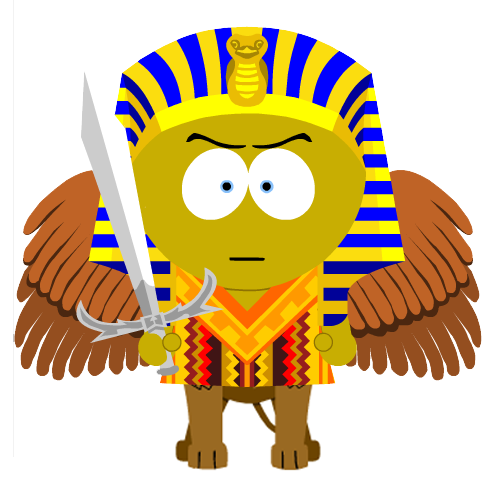 The creature is a sphinx - an ancient guardian creature - who asks them to present the keystones. It informs them they must complete a test in order to gain entrance and that they should prepare themselves for doing so. When they are ready they are to each take a keystone amulet and wear it, which will commence the test. With little hesitation the mages do as they are asked.

The scenery change and the three of them find themselves on an open plain. They expect to be experiencing some sort of illusion but they cannot detect any magic. A path leads forward so they follow it.

After a kilometer or so they see two characters awaiting them on a hilltop. As they come closer they see it is consuls Seneca and Quadrata. Doubting they are the real persons and more likely simple reflections they never the less show appropriate courtesy. The consuls ask them why they have come and what they aim to achieve. The mages answer, truthfully, that they have come to find a powerful artifact and to take it out of reach from consul Savvas. The two consuls fade away and the three mages can only assume this means they passed this part of the test. The path continues.

A second hill appears, this time with a lone character appearing to be the djinn Thriatos had summoned earlier. It challenges them to a battle but is quite easily defeated. Charon and Thriatos notice that despite several fire spells being cast the grass is not burned and looking back the landscape behind them seems to have changed. Seeing little choice they continue along the path.

Finally, they reach a large stony circle in which a third character awaits. They cannot make out a face before it is transformed into the great red dragon from the mountains. As it opens its gigantic jaws towards them they at first do not know what to expect, but soon realize its mouth is a gateway. As they cannot know where it leads - back to the underground cathedral or into the belly of a dragon - they hesitate but all three eventually walk through. They find themselves back at the bridge with the sphinx gone.

They walk to the light source ahead which appears to be a head-sized glowing orb. After careful examination they determine it is merely a container and needs to be destroyed. As they do so a smaller, obsidian-colored orb is revealed inside. Examining it as well Charon and Horacio deduce that the stone is harmful to living things and therefore commands Jamal to pick it up. Charon then recieves it into his satchel and they start heading back out. Unfortunately, the creature which made the giant tracks are waiting for them and is shown to be a hydra. They dodge its attacks and run for the exit - all making it except for Goran who falls over and is devoured by the beast as he attempts to defend himself.

Not really stopping until they reach the camp, the mages find a second unpleasant surprise. The remains of their servant Victor are found alongside clawed tracks and some evidence of feeding from the burned corpse pile. The tents have been ruined and their camels are missing but otherwise their belongings appear to be still there. Without any means of transportation they reflect if it might be possible that Goran and his fellow adventurers kept some camels close to their camp. Deciding it is their best chance they return to fetch some jewelry from the tomb, which they bring out through the goblin tunnels, and then set out on their way.

As night time comes quickly they have to search for the beasts in the dark, but Mergus manage to locate and round up two of the adventurers' camels. Getting some well needed rest, the group set out in the morning on foot, using the camels to carry their gear. They reach Osayla in the following day.

Enjoying the comforts of civilization as if they've been gone for years, the journey is however far from over and they stock up on supplies (and new camels) and head northeast, towards the town of Baava, with the aim of reaching the troll caves further north in the mountains. During their travel they hear rumors of a legion being lost in some battle in Pantoria and wizards from Menokh looking for a group of rouge mages - probably the three. Finding the mountains a good place to keep out of reach for a while they stock up on further necessary supplies such as real beds and lots of pillows. The small caravan then aims north for the mountain pass.

Reaching the troll cave within a few days travel they find it deserted and empty. With the trolls nowhere to be found they decide to journey to the Storm Eye and try to summon the dragon on their own. Finding the altar of the trolls they place upon it the dark orb along with one of the lightning staves found in the tomb. After several unsuccessful attempts at prayer (which is how the trolls did it so it must work, right?) they finally manage to summon the dragon. Without speaking it sends their offerings away with some sort of telekinesis spell. Its mere presense feels empowering and the three mages then hear its thoughts within their heads: build me a stronghold and assemble an army for the conquest of the Empire.
Posted by Niclas Ohlsson at 6:15 AM