A Sorcerer in the Inqusition

The whole family was supposed to do inventory at the shop all day, going through all ingredients, salves and bottles making sure everything was accounted for. But as always, my brothers had taken my youngest siblings and ran off as soon as they had the chance. Not that I could blame them though, doing inventory was tedious work.

The hour was late, and I was stuck in the basement sorting through a shipment which had just come in when suddenly a loud banging on the front door could be heard upstairs. As I walked up the stairs I could hear my  brothers, being the curious devils as they were, rushing down the stairs from our living quarters down to the shop to see who it was as my parents made their way to the door. Given the late hour, Adelia was a bit curious herself and started walking up the stairs and into the shop. The bell on the door chimed as my parents opened the door, a messenger said, “A message for Miss Adelia LeClair!” and then the bell from the door chimed once again as the door closed a short while later. As she entered the store area of their house Adelia turned towards her parents and brothers who stood by the door. They stood frozen all four of them studying the seal of the letter, my parents were visibly pale. Without even seeing the letter I knew who had sent it and thoroughly cursed myself for trying to wait for a good time to tell them about my new employer. Hoping against all hope that it wasn’t the Inquisition that had sent me a letter I made my way over to my family. I could see the look of worry as I met my father's eyes as he wordlessly handed over the letter. My brothers had questions written all over their faces though they were uncharacteristically quiet right now, no doubt realizing the severity of this moment.  Seeing that it was indeed the seal of the Inquisition I carefully opened the letter without breaking the seal and glanced at its content. Realizing that I would have to go I felt a slight moment of relief followed by a sense of guilt. “I… I must go... to… to work... I’ll explain later. This seems urgent” I said as I carefully folded the letter and put it in my satchel.

Adelia grabbed her coat and quickly made her way outside onto a dark street, knowing that when she came back, she would have to have a difficult conversation with her family. 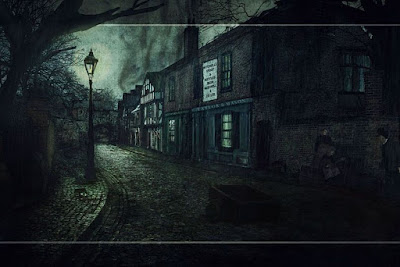 Posted by Niclas Ohlsson at 8:39 AM