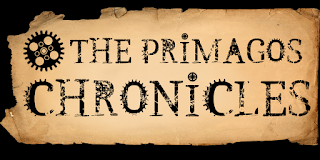 Undoubtedly one of the best campaigns I've ever played, the Primagos Chronicles also set the stage for one of the most extreme (called Cybermage - there will be another post for that one). It was a campaign that, for me, really made the Age of Knowledge come alive in its own right, rather than simply just exist as a middle ground between the two other ages.

I must admit: despite all my rulebook writing where several settings are laid out in detail I often opt for a completely different setting when creating a new campaign. Perhaps this is because the prewritten settings are already done in my head; I have a mental image of them already in my head. Thus choosing another setting lets me - as well as the players - explore something new.

In this campaign I went all the way on that thread as the players take the roles as mages ("magos") within the declining nation of Damasa. Various wizard clans are bickering over power and though new technology is somewhat of a hallmark of the Age of Knowledge it was quite absent in the characters' home city of Hermis, situated at the root of the Othos Mountains. 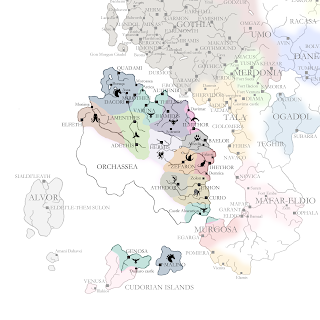 I invented 12 wizard clans/houses that wrestled for control over the nation and placed the characters as belonging to Ikalos - a craft-oriented clan with fairly good reputation and relations with just about everyone - to give them a fresh start. As for where the campaign was going I had only a very vague idea: one of house Ikalos' master craftsmen (or "artificer") would go missing (because another mage was trying to involve him in national politics) and the characters were to be tasked to find him. Where it went from there was a blank sheet.

Now the player group at my disposal was a bit smaller than usual: just three players. It was also three players that knew each other well, enjoyed playing with each other and, very importantly,  could handle internal conflicts both in and off game in a amiable manner.

From a GM perspective this is really my ideal situation: to be able to let go of group dynamics and let the story write itself by expanding on the subjects the players choose to engage in. Of course, the choice of characters lay the very foundation for this journey - so here comes an introduction. The only requirement I placed on them was that they should have the ambition to reach the primagos rank - which meant they would gain access to more powerful spells and allies but be forced to involve themselves in Damasan politics.

A complicated character, somewhat of a mix of Sybill Trelawney (divination teacher from Harry Potter) and Indiana Jones, Mehred is the son of a merchant family and is the character most skilled in the social arts. As it would appear he follows the rules of the nation, but when no one is looking he is more than happy to break them when he has cause to do so. While a bit distrustful he generally helps others throughout the campaign - though on most occasions he manages to do so and still turn a profit.

With a skillset combining biomancy (healing arts) and necromancy, Julian is somewhat at odds with himself right from the start. His family are mages too and they generally have good relations. It is a different matter altogether with Julian's (former) master - whom he betrayed for a chance at gaining power. This is a political side of him that is dormant for much of the campaign - but which comes back as very important towards the latter stages.

A pure blood wizard aristocrat, Vespian comes out as a mixture of Lucius Malfoy (from Harry Potter) and Captain America - if such a combination is possible... Staunchly loyal to his motherland he has volunteered as a fighter against rebels in Damasa' colonies (something magos are generally except from) and believes that the magos' dominance of Damasa must continue - though the different houses should put their quarrels aside and unite against external enemies.

The campaign started as planned with an expedition for the characters to find the missing artificer, after spending a few sessions establishing everyday life and a few of the characters' local contacts. As a central theme in the campaign was built around the fact that Damasa had been the enemy in several other campaigns and scenarios I wanted to continue to challenge the players in this perspective by offering opportunities to join with various factions whose ultimate ambitions would not be known to them from the start (thus possibly turning themselves into suitable antagonists in other campaigns).

The artificer the characters were looking for had withdrawn to an old hideout deep into the former Damasan colony of Javasia - now a full-fledged rebel nation. I had already planned for the following campaign developments:
As stated above the characters choose to engage with the mysterious mage Nepthys. This allowed me to elaborate on a new story.

Long story short, Morion and Nepthys are two characters at the heart of Centuria lore. They are rebelling against the dragon Halomyr's plans to shape the society of Umarald into a powerful puppet state which she can control. Their main issue with Halomyr's plans being that she doesn't care much for individuals or methods - she's only concerned with the "greater good", a sort of statistical judgement of success. While certainly not evil this can at the very least make her callous in her dealings with mortals. Morion and Nepthys resent this and tries to improve the world through more humanitarian methods.

With this in the back of my head I set out to design a plot. Now, the whole setting was already evolving around the fact that Damasa was getting a bit behind its main competitor (the nation of Gothia) and there was need for reform - but what if there was a reason this reform was not happening, beyond the bickering of the wizard houses?

In the Age of Steel Damasa is led by a nigh-invincible mage-emperor who was assassinated prior to the Age of Knowledge. Well, powerful mages tend to be hard killing - so having the emperor seek to return to life (to save his beloved country) seemed a nice touch. Now, any foe skilled enough to actually kill him would probably have anticipated this - so what if the country's state was a consequence of a status quo the most ancient and powerful mages of the nation did not dare to change?

Thus I invented the story of a demonic pact sealed by those who wished to get rid of the emperor. The plan had been to grant the emperor's soul to a demon - forever preventing his return - but this was not to be as one of the emperor's closest friends, a mage named Zalazar, assassinated him instead, part to save his soul and part because he knew a Damasa led by the emperor would stagnate even more than one without. Now, this created a conundrum for the original plotters - the pact with the demon had been made and it required the soul of a powerful mage. They tried to change the deal, to which the demon agreed, but such things rarely end well... thus one of the plotters agree to become the demon's mortal host and in the return the demon would be tasked with keeping the emperor from returning for all eternity. Only now the plotters would become preoccupied with keeping the demonhost at bay, seeking to limit its influence while still allowing it to do what the pact required of it. And this was the power struggle that kept Damasa from moving forward - none of the mighty wizards dared risk a change in the status quo that could give the demon the upper hand.

The plan of Morion and Nepthys was to slay the demon and have Damasa move forward again, ideally taking steps to becoming more egalitarian. While they did possess firepower enough to challenge the demon itself they needed a smoke screen to prevent other mages from meddling and also they needed someone to reform the country - as they didn't themselves like to be like Halomyr by deciding what was best for other people.

Nepthys would task the characters with trying to find allies among all the wizard houses to start a revolution. As she didn't want fighting in the streets going directly from a magicracy to a democracy seemed a bad idea. Instead the goal was to level the playing field among mages and prevent only a few ancient wizards from deciding the fate of the country and people they had little to no interaction with.

This suited the characters' goals and personalities rather well, but they had some issues with Nepthys keeping them in the dark regarding the context of the revolution. There was a reason for this; the demon had the power to hunt down people who knew about the emperor or its own existence and thus, keeping the characters unaware of this Nepthys was in reality protecting them.

Eventually they of course found out - through the appearance of the emperor's assassin and former friend Zalazar who sort of high-jacked part of the plot (being an extremely impulsive character as a means to remain unpredictable to his enemies I decided for him to unravel the entire plot as a result of one of the characters asking a particular question). From there it was an epic story with the characters seeking to achieve their political goals while at the same time avoiding the servants of the demon and those who wished to keep the status quo.

In the end they were victorious - though time would wash away much of the sense of victory. More on that when I write about "Cybermage"!

Posted by Niclas Ohlsson at 9:23 AM