Kragor the Merc: Water and Electricity 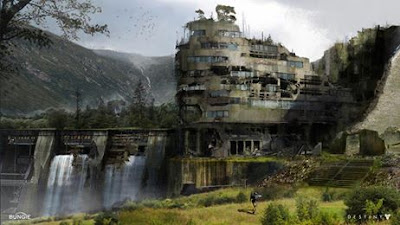 My last mission had got me thinking about serious shit. Making a name for myself... well it sounded silly in one way, but in another I felt it was the right thing. Its not too difficult to get famous - or infamous - in this wrecked city, but that's not what I'm thinking about. Making a name... its all about who you're making a name for, isn't it? I don't know that yet, but I'm working on it.

What I do know is that I won't get anywhere without the Predators. We're bundled together, so I'd just better turn it the right way with Erza still being out of town. But dammit, I don't know how to make these folks walk in the same direction; it seems everyone has secrets. I guess I'd have to share my story... it's what they do on the virex anyway and hopefully it works. Particularly I need to wrap my pretty head around that medic of ours - there is clearly something fishy going on there.

I got back a bit earlier than the others, so I started working on this plan. The Demon's Head were also back, but thankfully a bit fatigued from their Dukkha mission so didn't transform into their usual waste of breath. The only place I could think of to have a heart-to-heart talk with the others were the Mint. Standard place for some peace and quiet and they did have decent beer...

As the others got back they looked tired - but not too tired. I managed to get them all accompanying me for "a drink". Then I spilled my story. It was a funny feeling actually; can't recon that I recollected it all at once like that before. Oh, sure, Keria would have heard one too many of my stories but I was, well, about 20 when I met her. Things have happened since, believe it or not. But the point is it didn't feel so strange as I though it would. It was an interesting life, not a bad story at all. And it also got the others talking, which was the point of it.
Lucas was out first and, frankly, it was military-this, military-that. Nothing unexpected, though I think he said something about the Academy and magic parents? Regardless I put my money on watching Ed and Juron to see if they were listening in or preparing their own little speeches. Juron seemed a bit annoyed at the whole situation - would have to be careful there, as I don't want him against me. Ed did exactly what I expected and seemed to be planning something in his head. Well, as Lucas finished it was his turn.
Surprisingly I found Ed didn't come from the bottom ladder of society, but rather had thrown himself in that direction. Also his questionable medical accomplishments got explained as he declared himself a self-taught streetmage, with a hint of field medic expertise picked up during his last years in the Fringe. I don't trust magic so got Ed to explain what he actually could do with it, so hopefully I have some damn insight into how to use his skills in the field.
Juron was up next and as expected he was a bit off in his talk. Didn't really learn much apart from that the guy had apparently walked half-way across the Fringe by now in search of... well fuck me if I knew. Sounded like some ritual for reaching adulthood or the like. Time will tell I wager.
Last out was Angeline. Seems she had a tough upbringing and only a band of mercs prevented her from being raped by gangers at age 13. The damn girl had stuck to the trade every since, which is damn impressive. Behind that whimsy huggie talk there is a brain that gets things done. She's earned my respect.

Well, bonding time was over so we headed back to base. We did another practice run with Siri on the following day and ran some errands. Those damn drugs seems to keep disappearing...
One thing we didn't have to do was to find ourselves a new job - apparently GERO wanted our services again. Not sure if that means we're doing well or are simply viewed as expendables, but they do pay good.

The mission turned out to be to recover an old hydro power plant far out into the bush. It was a very long drive to pick up some components and then we had orders to fence in and secure the area. We got ensured that no other corps would be contesting the area so primary concerns were bandits. We headed out in a jeep and a truck.

As it was getting colder the roads weren't as wet as they've been recent weeks so the driving was ok. I felt strangely alert all the way without getting fatigued - I guess it was the effects of that biomod. That shit was good.
We reached the first base and picked up our cargo with no incidents and then continued forth. It was a long, uneventful drive until suddenly we spotted a large tree across the road - accompanied by a camouflaged vehicle stationed at the side of the road. Bandit ambush.
As it usually turns out, us spotting their position turned the tables completely. Lucas had started putting bandits down before they knew what was happening and with our vehicles parked a bit further back me and Juron headed out to face them. They where trying to charge in with their jeep so I lobbed a fire grenade into the driver seat. That unfortunately got them steering towards us; Juron got shot and was about to get run over as I managed to throw him to the side. The bandits crashed in the woodland behind us and the others took down the survivors. For my part I felt alive - so fucking alive. Stand in our way and you'd find your corpse burning by the side of the road. It was like a confirmation that my thoughts on life and everything was right - things would go my way.

We collected some of the bandits' supplies - which included an assault gun - and moved the large tree out of the way then we continued. The rest of the drive was uneventful, but as we reached an open area surrounding the hydro plant we were heading towards we noticed fields and a collection of tents. Of course there were settlers here. A dozen or so had made their way on to the road, blocking our path. All seemed to have guns. Well, we could solve this. The last thing I wanted was some moral shit-talk but it didn't have to turn into a shoot-out either. Yes, I may be a cynical bastard but if these people were to die today I'd damn well make it their own decision. So I walked over.
The leader turned out to be an orc woman, which was bad. Like Erza they like to be in charge. I tried to explain the situation to them but they were stubborn as hell; seems as a character description of every farmer I've ever met. I went back to the others to discuss matters. Ed explained that the leader appeared to be a streetmage and were as we spoke casting the same type of protection spell he himself used. I knew nothing about mages so I readily handed negotiations over to him - hopefully he knew how such people worked and he had pleaded for a chance of negotiating for several weeks.

We walked back and resumed our talks, while we noticed half of the thugs had moved away into the nearby woods. Ed tried to push the orc into getting the situation while I tried to find a legal way to have GERO put up shop without getting into trouble with these people. However, they had resented society to such a degree we couldn't find any common ground. And Ed and the orc really didn't get along and so suddenly, after yelling at each other, she hit Ed in the chest with some sort of lightning. I let my shotgun blaze and took out two of the others while I got a scratch in return. I had expected to hear the heavy thud of the assault gun by now, but instead there were an explosion further back and we continued to exchange fire just a few meters from each other. The orc screamed in orcish about sparing those that ran while killing the rest, then she hit me with a lightning bolt which hurt like hell. I the fraction of a second someone had kicked my leg out of the way and another put a gun to my head. Things were going wrong, but I already had a new plan. We only needed a bit of breathing space and she had just provided it for us. I picked up one of my grenades as I gave the order to retreat, loud and clear. Orcs were generally hard on their principles so I hoped this would mean she let us go. Then we could regroup, manage our wounds and well, shoot these people dead from a distance. I just hoped that I would be able to stand for a few more hours. Ed turned out and gave me a pat on the back and the pain almost went away; magic is weird. Again I got the feeling that nothing would be stopping us; we might look beaten now but just wait and see...
Posted by Niclas Ohlsson at 8:38 AM