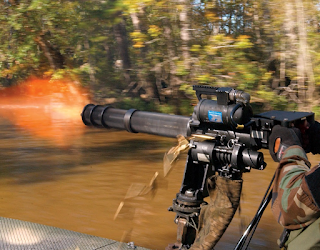 I was backing away from the fight, arms held high but a grenade at the ready. Ed was running back to lend a helping hand to Lucas. Ok, it could be worse. Back off now, drive away to give ourselves a hundred meters distance or so and we could end this in our favor.

It was a good plan until the sound of automated fire broke the silence. It was still a long way to cover behind the jeep, but didn't seem to be any other options, so I threw the grenade and ran for it. Judging from the screams I hit something. Unfortunately something also hit me as I felt a staggering pain in the knee. Not the fucking knee! Memories from that old mercenary camp immediately came back but I supressed them and threw myself to the ground. The heavy fire from the assault gun ended and only a few stray shots crossed over the battlefield. I popped a mort and with the pain dying away asked who was alive and who wasn't. Everyone but Juron called in. Angeline asked what we should do. Fuck it if I knew. Instead of a plan we now had a mess... at least it seemed as if most of the surviving settlers had retreated into the power plant, with the exception of someone firing fromt he nearby woods. Lucas took care of that. I dragged myself into the jeep where I found Juron collapsed next to the assault gun.

Checking in it seemed Angeline was the only one unharmed. Lucas seemed to be ok while Juron was definitely out of it. Ed turned up and healed us, though it seemed to drain him a little too much. Juron remained unconscious. I shouted towards the power plant that they had 1 hour to pack up and leave. I wouldn't go through this ordeal without getting paid.

Within the hour we saw the settlers get out and ditch. Yeah, they had a hard winter coming. More so because of stupid leadership. But with them gone we would be able to get to work, at least after some rest. We took turns keeping watch as we rested and tended our wounds throughout the night. As morning came it didn't feel good but it did seem as if we were going to live. Juron was in a pretty rough shape but there was nothing else we could do and he was a stubborn fellow so I thought the odds were on his side. We started doing what we could with placing the perimeter bots and rolling out the fence. As the day past it was clear we couldn't finish the latter but we did what we could.

At last the corps showed up. I should probably have been expecting them to be smug about the fences not being done but I had been shot several times - including the fucking knee - and was in no such mood. For a moment I thought about burying the bastard out in the fields but hey, money first. Erza had come with the column so it was a relief to hand over command. It had felt good for a while but with this kind of shit going on I'd rather take a break.

Soon the jeep was heading back to town.

It felt like another life, arriving back at the city and getting patched up by Rosina. A few hours later I found myself back at base, at the firing range emptying the clip in my auto shotgun. I took my time as I needed to clear my head. What had gone wrong? I couldn't put my finger on it. We should have cut through those farmers like a hot knife through butter. The brain switched to thinking about food for awhile. Well, we had survived what would have killed most others. That counted for something; enough for me to find reason to leave the firing range and join the others for some beer and food. Well, some of the others. Ed where still at medbay for observation and Juron was undergoing surgery. As Erza was back we made another round sharing our stories. It felt even more ridiculous this time, but at least it was done.

Our day off was spent job hunting. Discussing the matter Juron - now back from surgery - let pop that he somehow had learned about the mysterious assailant who claimed Lucas' arm a few weeks back. While the issue of revenge was raised at least me and Erza agreed we also wanted some money out of it. It was something to think - not act - upon for now. Despite some reluctance from Angeline me and Erza decided to head out to talk to the clans to see if there was any well-paid work to be had. This took us far into the blocks.

We met our contact "Joline" at a top floor apartment hidden away from spying eyes. We were offered a mission to blow up a bridge in the tech district, but at 7k it seemed both dangerous and complicated so it was back to the office. After scanning the board we finally settled for a perimeter patrol for Terra Petrolium.

For all my sins it turned out we'd have to do the whole job on foot. Curses didn't carry my pack so in the end it was Juron who did. I swore an oath on that spot that I'd be chasing Lucas on his stupid morning jog until this would never happen again. We had some wildlife encounters but nothing serious. There were some sensors which we were to check on; Juron did most of that job. In the end we got back, got paid and it felt like being back on track.
Posted by Niclas Ohlsson at 10:10 AM