Depraved of their leader, Awhero, Geb and Kaeso nevertheless decide to attempt to complete the mission they were sent on. However, first they bury Ignatia and have a small ceremony, then move their camp into the caves and out of sight.

While Kaeso tries to learn more about their quest from Ignatia's private note book, Geb and Awhero continue to explore the tomb. After finding empty crypts and a storage room left behind by a previous expedition they do come upon a closed door which they cannot open despite several attempts. Resting on the matter all three return in the following morning and successfully open the door to reveal a burial chamber, which contains a sarcophagus but apparently little else. A weak magical resonance still encourage them to investigate. Searching the tomb Kaeso determines the magic is hidden beneath the wrappings of the mummy resting within the sarcophagus. No one is however keen on disturbing the body, so they leave it alone - at least for the time being.

Beyond the chamber they find additional tombs and a corridor blocked by a collapsed ceiling. After clearing a small path they are able to squeeze through, discovering two untouched chambers filled with grave goods such as pottery, scrolls and statues. Geb is fascinated by the scrolls while Kaeso finds a magical armor and a set of magical daggers. Claiming the artifacts and a few of the scrolls they leave the room behind as the corridor is still too unstable to remain safe.

The remainer of the day they spend at the old fortress, which Geb is convinced holds a secret pathway deeper into the mountain. He is proven right when Awhero eventually finds it and it appears to reveal an even older tomb, hidden behind the other structures. They enter a large underground hall, partially filled with water and very damp. A large pool restrict their movement to the intended path, but they still see a raised platform with several sarcophagi at the other end of the hall. Although spotting something in the water as they pass by they decline to investigate as they fear it could be dangerous. However, danger is soon upon them as approaching the sarcophagi awakens the guardians of the tomb. Kaeso is forced to combat a powerful undead wielding a deadly warhammer while Awhero tries to keep more undead from entering the hall behind them. Geb, well aware of his short-comings in a battle, searches feverishly for a way out. He finds a corridor and as Awhero is unable to hold back the advancing zombies they make a run for it. Kaeso luckily manage to disarm his opponent and take its hammer before joining the others in their escape.

As they run deeper into the underground complex they end up on a corridor which stops at a strange door. Opening the door they realize it is a hidden path into yet another section of the tomb and one which can only be opened from the side from which they came. Beyond lies a new corridor and they quickly realize the danger is far from over as the corridor is filled with decomposing corpses. But they reason the danger from behind is more direct, so they close the door behind them in an attempt to fool their pursuers. There is now no way of returning.

With little choice they begin exploring the place which they have reached. The dead are soon determined to be undead fallen in battle - raising the new question of who has battled them in the first place. To the south they discover a large crystal cave hosting an altar and a large, sinister looking statue remining them of some kind of demon. Deciding it definetely feel like a trap they stay clear and instead explore some smaller caves, where they encounter a madman calling himself "You". Who he is and how he came to live in the cave remains unanswered, as too many questions drive the man into a fit and he runs away only to fall into a pit and die. The caves house some grave goods apparently tucked away but no exits - forcing them to return to the tomb and the mangled corpses.

As they explore north they come upon a man dressed all in black. He acts friendly and appears to recognize Geb. As they converse with him it is revealed he is too an undead - a servant of the ancient empire of Zhend. He offers them a choice: to serve his emperor or be killed. As it turns out, serving the emperor requires turning them into undead, so they really see they have little choice. Escorted away by a guard of undead they find themselves outside in an unfamiliar mountain region. Marching east, a sudden landslide provide Awhero and Kaeso with a chance of escape - but they are forced to leave Geb behind while doing so. 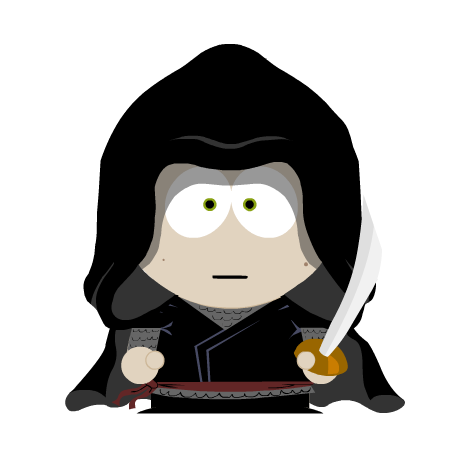