It is not without pride that I can finally announce the release of the Character Generator v3: http://cg3.centuria.appcloud.se/. Much is of course the same as the previous version but apart from being implemented in the outstanding Blazor framework I've introduced some additional changes!

I've added save and load functionality for characters in progress (the Dagger's Watch will still display completed characters). I did deviate from the rule books by introducing archetypes and personalities (personalities are technically in the rulebook but not used for PC:s) to speed up character creation and help produce more plausible backgrounds. It feels like a suitable way to take advantage of the possibilities a generator grants in a way that would probably not work so well if incorporated into the rules themselves. 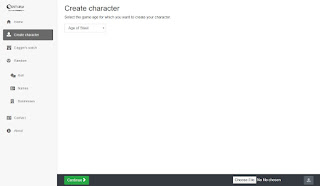 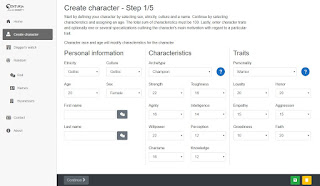 There's also a lot of small bugs and such stuff which have been fixed or improved. Then I've also gone and implemented a 'description' option for random businesses, which will add a neat little description to each business generated (if you've checked the option). Not a whole resume but something to get you started with some ideas.

I hope you enjoy!

The old generator will be around for some time still, but eventually it will be removed.
Posted by Niclas Ohlsson at 2:15 PM