Here it finally is: the completed map over the continents of Amara and Anaku!

While this post will not go into cultures and civilizations here is a short overview for the major regions, starting from the north, going south:

Beyond the glaciers, highlands surrounded by mountains cover much of northern Amara. Large forests dominate much of the landscape.

Further south a great steppe stretch all the way from the western to the eastern end of the continent, surrounding a large body of water known as lake Zhizni.

Even further south massive deserts cover huge areas of northern Anaku, down to the central mountains of the continent. Here jungles cover much of the land.

Further south still, dry steppes or savannas open up and run alongside the mountains to the southern end of the land.

With Amara and Anaku completed there's only one continent remaining: Kynri. However this mysterious land must wait for a while - next on the to-do list will be an expansion module for the three new continents not covered in the rule books (Amara, Anaku and Thamal). 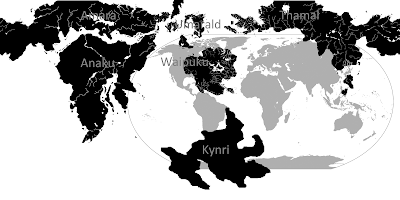