Ah, Gwendellor. This brings back memories as the first ever campaign in Centuria took place in this country. 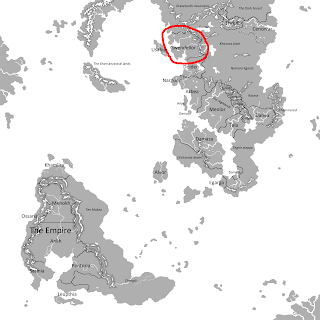 The idea with Gwendellor was a frontier nation at the edge of civilization. Monsters and beasts lurking in the forests and hidden secrets deep in the mountains. A little Scandinavian touch but a bit more mysterious; the land should feel foreign and dangerous even to those who called it their home.

The Order of the Falcon was at the heart of the concept of Gwendellor. I can't recall exactly where the idea for the orwellian order of assassins came from, but there are plenty of historical references to draw upon such as the hashashin and the knightly orders of the crusades.

What I do recall is that from the start I envisioned Gwendellor as a land the humans had wrestled from the orcs. Indeed I decided that the human cities were still housed within walls once built by the orcs. It was something that would give the orcs, a very stereotyped race, an interesting history - something for those serving the Order of the Falcon to consider and dwell upon as they fought with orcs; the orcs where there first. And they weren't just primitive savages; they'd have cities - an empire even. And this gave birth to the idea of Orchiag - the ancient orc empire that spanned the length of the Northlands. This suited just fine with my aspirations to make Centuria a game where things weren't just black and white.

I wanted Gwendellor to be a fairly sparsely populated nation. Manpower would be a scarce resource. This would explain why the Order was prepared to put so much effort into every recruit, and also why those that survived to become full members of the Order enjoyed such benefits. It also helped form a picture of the Order's relation to the overall population of the country: the people was a resource; nothing more, nothing less.

One more thing I wanted from Gwendellor was a multicultural environment with equality between the sexes. It made sense then, that the nation was formed as part of the Empire's initial expansion into the Northlands. Gwendellor had been the furthest that the human armies had ventured in their quest to defeat the orcs. But how had the land fallen into the hands of the Order of the Falcon?

The idea I came up with was that the Order of the Falcon was just one out of several orders which had formed the backbone of the imperial invasion. Naturally, the Order of the Falcon had been in charge of intelligence and espionage, but it would then make more sense for it to exist in Damasa or Gothia. Historically I believe far flung outposts have been benefical to those who wanted to be able to do things their own way. So, the Order had been expelled from Damasa during the civil war but rather than retreat and operate under the queen in Menlor the leaders of the Order decided they'd do better by handling themselves - acquiring new land to manage their own recruitment pool might have been a strong incentive. Gwendellor probably wouldn't have been a first choice, but available land is scarce and the Order would have picked what it could get its hands on.

So the story of Gwendellor is pretty simple, yet very appealing (at least I think so). And that was really the goal of it; to create a very interesting place for a campaign with lots of possibilities (forest exploration, battles with the orcs, assassination missions and so forth). As the Order is described as one of the few to combine combat training with magics (at least in the Northlands) it was also an excellent opportunity to try out a very wide range of rules for the game.

You could say Gwendellor was the trailer for the entire game and it is still one of my absolute favorite settings, particularly in the Age of Steel!
Posted by Niclas Ohlsson at 12:53 PM