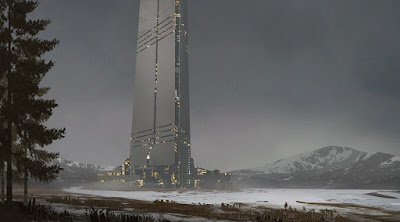 If someone would have asked me if I believed in fate a week ago I'd say 'no'.

Well, I ought to keep to the timeline, right? We were leaving the undercity with three truckloads of gold, driving like crazy past - and sometimes through - gatherings of subdwellers, trying to navigate our way out. The fire and explosions from the robbery - for that was all it really was - felt very close. Then we left the tunnels behind...

And it was still daylight. A few blocks later we hit normal traffic and instead of the mad driving we just flowed with it. The heart was pumping and screaming while the world seemed to go in slow-motion. I guess this is what Juron craves - at least at times. It was oddly comforting.

We left the vehicles at the designated drop-point and then headed out. Joline was nice enough to select a meeting place nearby, so we collected our payment, paid off on some debts, and then headed back home. Someone was watching and I wondered who. It seemed a bit low-profile for the arbitrators and from Joline's reaction I figured it wasn't she. Was it one of GERO's assassins keeping us under surveillance? Little did I know...

Juron was left at the medbay in what seemed a routine part of any mission. He'd taken a gunshot wound to one eye but fortunately it didn't look critical. The rest of us just headed back to base where we went through the pickings Hawk had collected. Coupled with 24k in cash it was a good pay. But the question kept coming back: what was our purpose, why were we doing this? I guess I wanted a reason for the killing. Old man problem.

I didn't get any answers of course - not even after a night out with too much drink, which for once felt like the right thing to do. The following day was back to the question of what would we do next? And there it was on the news: GERO opening some new research facility out in the wilds. Promised to make everything good and bring us all to happy-land. In my experience if you heard shit like that on the prime channel you ran for it. But I'd grown tired of running. But it was about time we learned what the fuck was going on. Time to contact my good friend mr Blackbourne and hope he kept up with things. Indeed he said we should meet and discuss - which probably indicated major shit was going on. This state of affairs was confirmed by job offers being at an all-time low.

I learned a lot from mr Blackbourne a few hours later. GERO was taking over town, more or less. Slowly, over time, they've bought themselves a majority in most major corps in the region. Then there was the rumors of the encampment for escaped criminals, the assassinations by Abriel's "body guard" and of course the defector K... yeah, it looked serious. I tried to leave a hook with Blackbourne - his family was rich and influential and they probably wanted GERO cut down to size.


Back at base I... well its hard to describe really. There was a grill. And then... there was fire. From a top-floor window in the Freelance building. With his heavy flamer Juron turned a dead cow (or whatever it was) into a meal faster than the damn breakfast machine could deliver a bowl of snot. It was hard not to have a party after something like that, but sometime during the evening I shared what I've learned. I don't know exactly how things played out after that, but at some point I noticed Hawk taking Erza outside. There was definitely something fishy about her so I followed. It turned out she was working for Sam - our mystery savior from the fucked-up weapons high-jacking. And Sam had a job for us which involved taking on GERO somehow. For the job itself we would have a meeting with someone up the ranks, which seemed reasonable. But also we would have to make sure that the Demon's Head were too occupied to take any job offers from GERO. It was definitely a selling point for me.


The following morning was spent on an evil plan. The only sort of job offers worth doing which was still coming in was for Dukkha. So for that reason - and some more - it seemed natural to send the Demon's Head there to earn some creds. For a couple of weeks. He. Listening to Erza giving the news to Krelik would keep me warm inside for many a cold night.

Later that evening it was time for our meeting with Sam's mystery organization. We were lead to an odd, hidden away roof-top installation in the blocks. Clearly someone had both cash and the connections to get hold of some advanced tech. Keria would have drooled at the sight. So we got an introduction, a slight show-off as the bastards had hacked my tracking dots to keep us all under surveillance - and also news that they had already found and taken care of that rumored prisoner encampment we've heard about. So what did they want from us? I almost laughed myself to death when I heard it: we were to infiltrate GERO and wait for further orders. The irony being we had ourselves discussed exactly such a course of action not too long ago, and here we were. It was going to be difficult. It was going to make a difference if indeed these guys were bent on taking down GERO as they claimed to be. And it would by all hells be damned well paid - of that I would make sure.

So suddenly we were doing something. Something that mattered. And there was someone to pay us for it. I had looked forward to this for some time. And it seemed I've been led to this place even when I seemed to choose otherwise. If someone would've asked me if I believed in fate now I'd still say bloody 'no'. But it had me thinking alright...
Posted by Niclas Ohlsson at 8:40 AM