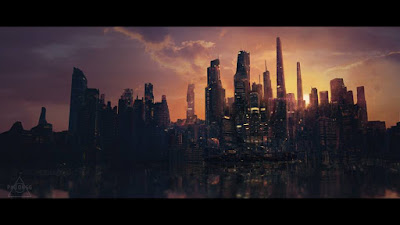 Happy wasn't part of the repertoire as we headed back to get Lucas another arm and Angeline back on her feet. I for one didn't mind the silence though; it gave me time to think. That the GERO gig had been busted by an inside job seemed pretty obvious so I was more thinking ahead. Vengeance would of course be nice, but that was a long road and we needed both intel and money before we could make any moves in such a direction. Generally you could get the other if you had one of them and since we were certainly more cut out to get money than intel then that seemed like the road to take. We only needed to get past Ed's negotiation skills.

After having dumped Lucas and Angeline at the medfac we returned to base. Did a short report to Eliza and learned that Erza was in the building - which felt like very good news. The old gods might know I for one ain't much for military discipline, but sometimes it has it's uses. Unfortunately, while Erza was off the charts on that one her bartering skills were perhaps not what would get us a good salary. I decided it was time to get this sorted out and get my hands on some tech which could aid us.

We had a day off before it was going back to work though, and from Eliza we learned there would be some premium tech available at our dependable arms supplier. It seemed as a good way to spend a day, coupled with the fact that Lucas couldn't be expected to do much else than walking. That didn't stop Erza from making a small challenge against the Demon's Head and pick a fight with the clans - the local crime mob. Good thing we had a working day coming up or we'd end up with more enemies than we have bullets for. On the other hand, bullets are quite useless when you haven't got any enemies so it might still turn out interesting in the end.

The job we took was a standard escort, this time for a corp called Grootgrond. I had some damn trouble staying off the vitagels - guessing they're getting to me - but besides that there was nothing we couldn't handle. This time that included the contract dealing; my investment in a module covering last year's business prices paid off as we got standard fares at the higher end of the scale and even full-payment for a five man team with only nine arms. A few more jobs like this (which would also give the good doctor time to attach that new vat-grown arm to Lucas' shoulder) and we'll be ready for some more serious business.
Posted by Niclas Ohlsson at 5:59 PM